Last week I had the great pleasure of traveling to University of Illinois to take part in several immensely rewarding activities.

Over the years I have been a guest artist at dozens of schools, colleges and universities around the world. The opportunity to engage with students – whether in a lecture, performance, masterclass or, as was the case at University of Illinois, something completely different – is exceptionally rewarding and I always enjoy becoming part of the local musical culture when I am visiting.

The invitation to travel to Champaign-Urbana came from Scott Schwartz, Archivist for Music and Fine Arts and Director of the Sousa Archives and Center for American Music on the University of Illinois campus. Scott and I had met many years ago at the Great American Brass Band Festival in Danville, Kentucky, where I had presented a paper about the use of serpent and ophicleide in brass bands and I performed a solo on ophicleide accompanied by the Athena Brass Band.

Scott asked if I would be interested in coming to Illinois to give a lecture/demonstration about early American trombone makers, their innovations and marketing strategies. The Sousa Archives had set up a very nice exhibit of six late-nineteenth and early-twentieth trombones as well as mouthpieces, catalogs, advertisements and other ephemera. In addition, we had selected six other instruments for me to play and demonstrate. Oh, and not to be lost in the moment is that the Chicago Cubs had just won baseball’s World Series and it seemed appropriate to make my Cubs hat part of the display.

I always enjoy getting my hands on, talking about and playing old instruments, such as the alto valve trombone pictured above. The time at the Sousa Archives was very rewarding and was made more so because of the engaged audience and their great questions. the trombone exhibit will run for many more months along with an exhibit about the great American composer and bandmaster, Henry Fillmore. If you’re in the area, don’t miss it.

I have known Jim for decades and have the utmost respect for him as a player and a person. Several years ago I reviewed his superb CD, X Over Trombone, and I consider him to be one of the most creative players – and composers – on the scene today. Despite our long friendship, we had never played together, so we started the masterclass with a performance of Charles Small’s duet Conversation.

The third piece of my University of Illinois trip was a performance with the Marching Illini Band under the direction of Barry Houser. As an event with another connection to my trombone lecture and masterclass, I led a group of 75 trombone players – both members of the Marching Illini Band and students from local high schools – in a performance of Meredith Wilson’s 76 Trombones to start the halftime show of the Illinois/Michigan State football game. 75 + me = 76 Trombones. That doesn’t happen every day. Click the video image below to see the whole halftime show; it begins with 76 Trombones, and continues with a tribute to the Chicago Cubs and much more.

Now, when you put 76 trombones on a football field accompanied by a marching band, that is one impressive sight and sound. My hat is off to the Marching Illini for inviting local high school trombone players to join with the 40 trombonists of the Illini Band to get us up to 76 trombone players. This is one fine band, and I was caught up in many of their great traditions. School spirit was alive and well; it was a great day of interaction for all of us and, hey, Illinois won the game. It must have been the trombones. 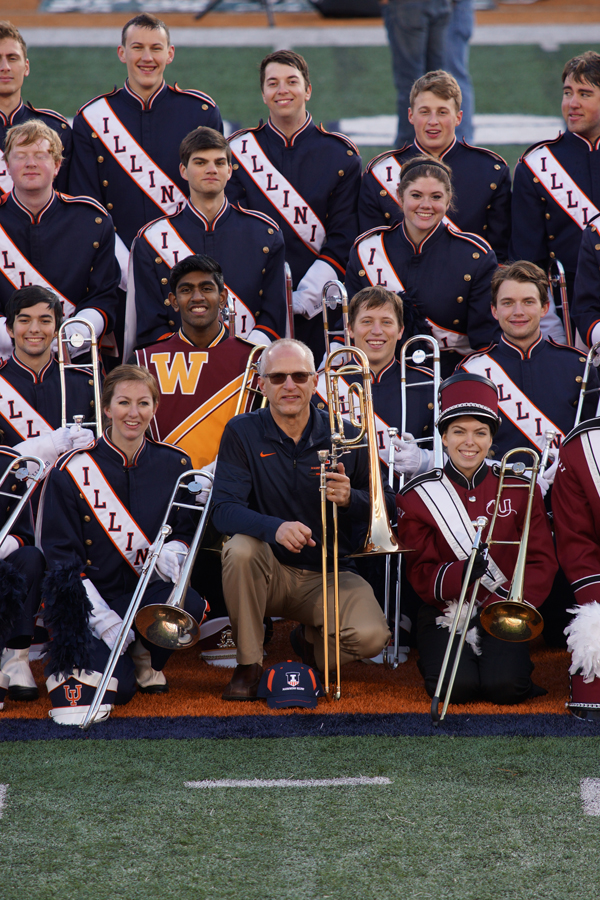 I want to send a big THANK YOU to Scott Schwartz for making all of this happen, to Jim Pugh for his setting up the trombone masterclass and for playing Conversation with me, and to Barry Houser and all of the members of the Marching Illini Band for a great few days where we all came together in Illini blue and orange and celebrated the trombone. This was a memorable and very satisfying trip. Go Illini! I – L – L – – I – N -I !

[And thanks to Scott Schwartz and Grace Talusan for the photos.]