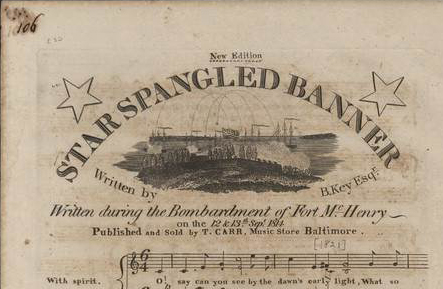 National Anthems have been in the news recently for good reasons (Winter Olympics medal ceremonies) and not so good reasons (see the end of this article). Count me among those who believe that when our National Anthem is performed, it should be done so in a respectful way. Our country has a lot of problems, but our National Anthem speaks to our hope for the best that the American experiment can be. It is a symbol of the freedoms we enjoy, and it is a reminder that the old cliche, “Freedom isn’t free,” is true. My father served in the U.S. Army during the Korean Conflict (6th Infantry Division) and I am proud of his service for our country. Last year, my wife and I visited Fort McHenry in Baltimore where Francis Scott Key wrote the words to The Star Spangled Banner. Being there was a very powerful experience. Sing it or play it: from where I sit, I want to hear our National Anthem performed in such a way where the tune is recognizable, the words (if sung) are understandable, it is at tempo and a key that is singable by the audience, and it draws attention to the Anthem itself, not to the performer.

During my nearly 30 years as a member of the Boston Symphony/Boston Pops Orchestra, I played the National Anthem more times than I can count, and many of the most memorable performances were at sporting events. I played it at Super Bowl XXXVI in New Orleans in February 2002 (when the New England Patriots defeated the St. Louis Rams); this was the first Super Bowl after the terrorist attacks of September 11, 2001. The Boston Pops Orchestra (Keith Lockhart, conductor) accompanied Mariah Carey; the trombones were Norman Bolter, Ronald Barron and myself  (to view this video on Youtube, click HERE):

The Boston Pops brass section, Keith Lockhart, conductor) also played the National Anthem in 2008 at a Boston Celtics/Los Angeles Lakers NBA Finals game (the Celtics won the game and went on to win the NBA Championship); unfortunately no video is available for that performance but here is a photo. James Nova and I played trombone; Gary Ofenloch is playing tuba. 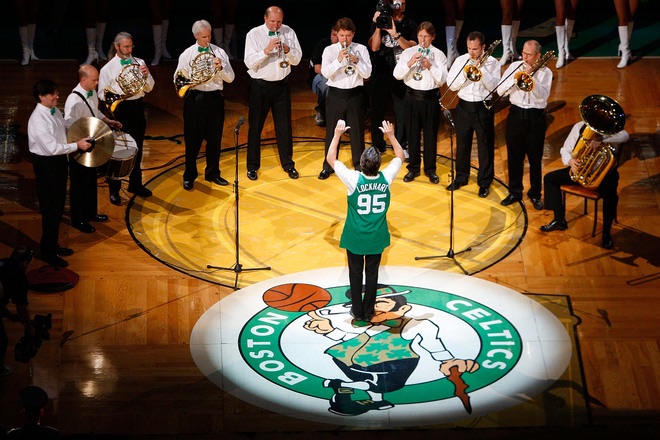 In 2010, the Celtics and Lakers were back in the NBA Finals again and the Boston Pops brass section with members of the Tanglewood Festival Chorus (James Orent, conductor) played the National Anthem once more; the trombone  players are Ronald Barron, Hans Bohn and myself. The Celtics won that game but the Lakers went on to win that NBA Championship. To view this video on Youtube, click HERE:

I also played the National Anthem at many other New England Patriots and Boston Red Sox games. It was always a thrill to stand at center court, or the 50 yard line, or around home plate and do this. Always.

When I began my four year tenure as Professor of Trombone at Arizona State University, I wanted to bring special kinds of musical experiences to my students. Twice, the Arizona State University Desert Bones Trombone Choir performed the National Anthem before Arizona Diamondbacks Major League Baseball games. I searched long and hard to find an arrangement for trombones that I thought met all of the criteria I put forth for a great performance at this kind of venue and event. I was very happy to find one by Robert Elkjer that fit the bill.

To have a chance to play the National Anthem at Chase Field in Phoenix, we needed to record a demo video. This we did in the fall of 2012; it was recorded in a large rehearsal room at ASU. Here is our demo video (to view this video in YouTube, click HERE):

Later that year, I was honored as one of four finalists in the Arizona State University “Faculty/Staff Most Spirited Sun Devil” contest. This was a great, fun honor, to be the representative of ASU’s Tempe campus in this contest. I certainly had school spirit, and I was honored at halftime of an ASU/Stanford basketball game. Our ASU Desert Bones Trombone Choir was asked to play the National Anthem at that game; here is a sideline camera video taken by my wife. I think what I find so riveting about this particular performance is how respectful and quiet the audience was until the Anthem was over, at which time it burst into spontaneous applause and cheering. It was a great moment (to view this video in YouTube, click HERE):

A year later, in 2015, we were invited back to Chase Field to play the National Anthem at an Arizona Diamondbacks/San Francisco Giants game. It was a thrill to do this the first time. To be asked back to do this a second time was very special for my students and me (to view this video in YouTube, click HERE):

In all of these performances, we tried to bring the best that we could to the table, to honor our country, and express hope in its highest ideals. A recent performance of the National Anthem has been in the news in recent days for all the wrong reasons. A pop singer named Stacy Ann Ferguson, who goes by the name “Fergie,” sang the National Anthem at the recent NBA All Star game. She has come under fire for her performance. Hers was a particularly awful, self-aggrandizing performance that has come in for heavy criticism in the media. Was it the “worst performance” ever of the National Anthem? I haven’t heard enough to judge, but you can hear it for yourself. I’m all for tasteful artistic license, but as you view her video below, follow along with the music below, a transcription of her performance that was sent to me by a friend (it seems to be making the rounds in the Internet; I don’t know who did the transcription). Watch the words (or lack of words). Listen to the pitch. Note that she sings the Anthem in 4/4 meter rather than 3/4. The list goes on. . . 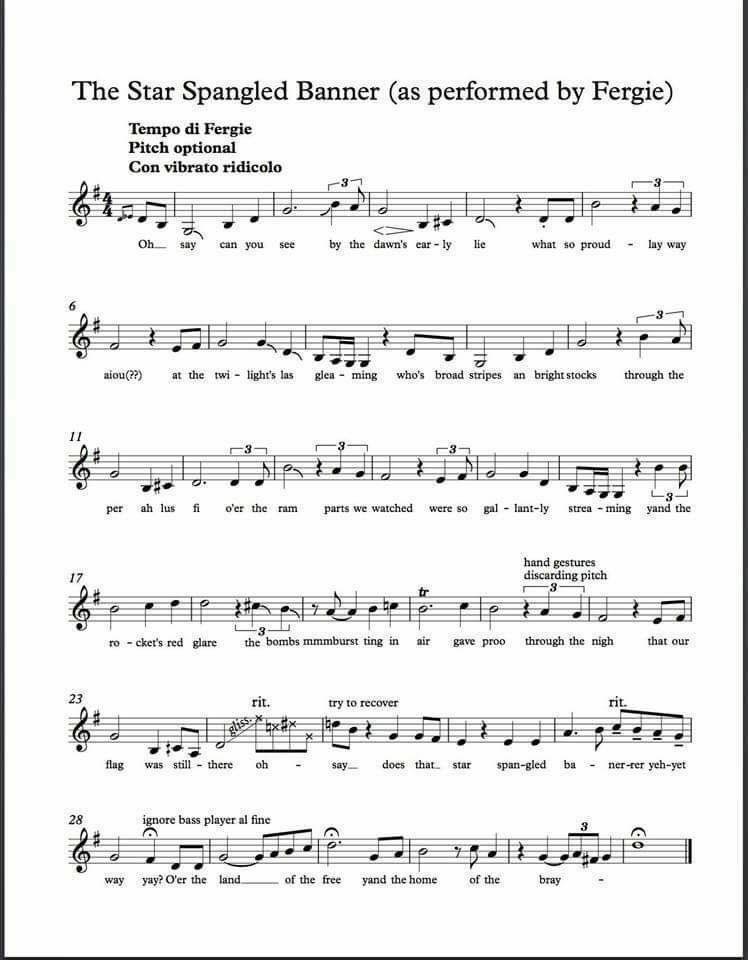 Uh, no. Memo to “Fergie”: this song isn’t about YOU. It isn’t about how cool you think you are. It isn’t about making a statement. The words have MEANING; they are not just vocal syllables that you can slide over, making them incomprehensible. You gave the world a clinic on how NOT to sing The Star Spangled Banner.

“Fergie’s” performance of the National Anthem stands in contrast to the respectful performances by so many people who, despite the many flaws in our country, recognize that the National Anthem is a powerful symbol of what is good, and right in our land, and the hope we have to make it even better. How we sing or play it matters. I’m glad to have been a part of many memorable performances of The Star Spangled Banner, and thereby do my part – as have so many others – to aspire to its ideals. The Star Spangled Banner. Long may it wave.

My wife and I live on the southwest side of Phoenix in the foothills of the Estrella Mountains. We love living there. It is quiet and dark at night, and we are surrounded by stunning natural beauty. We live just south of the Gila River, in an area that used to part of Mexico before the Gadsden Purchase transferred 29,670 square miles of Mexico to the United States in 1853 (for a payment of $10 million dollars, roughly $270 million dollars today). Most of that land became part of the Arizona Territory and nearly 60 years later, in 1912, Arizona became the last of the lower 48 states to be admitted to the Union – State 48.

We also live in what is called the Sonoran Desert, a unique ecosystem that covers 100,000 square miles of southern Arizona, a small part of southern California, and Sonora and Baja, Mexico. It is a remarkable place with an iconic, ever changing landscape. Principal among the things that make the Sonoran Desert so interesting is the saguaro cactus.

This cactus — pronounced “soh-WAHR-oh” —along with the American bison, has become the symbol of the American west. They grow slowly and they grow tall. They usually sprout arms, and have beautiful, white, trumpet bell shaped flowers in the spring. They live for many decades. And then they die.

Today, my wife and I enjoyed a very nice four mile hike in the desert just a few minutes from our home where we were surrounded by these great cacti. It occurred to me as we were hiking that we got to see saguaro cacti in nearly their whole life cycle. So I took a few photos to share with readers of The Last Trombone. 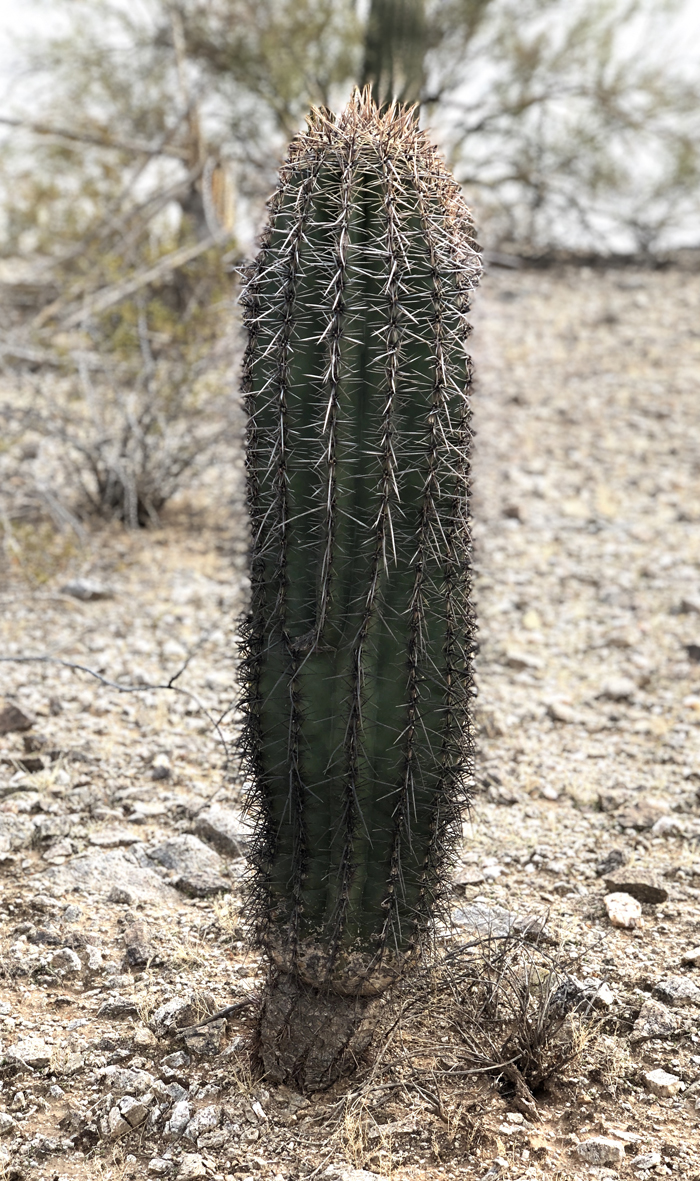 Like every plant, the saguaro cactus starts out small. This young saguaro, above, is about three feet high. If it sprouts arms, that won’t happen for many years. The growth cycle of the saguaro cactus isn’t fully understood and some saguaros will bud arms when they are about 60 years old while others stay tall and straight with no arms for their whole lives. 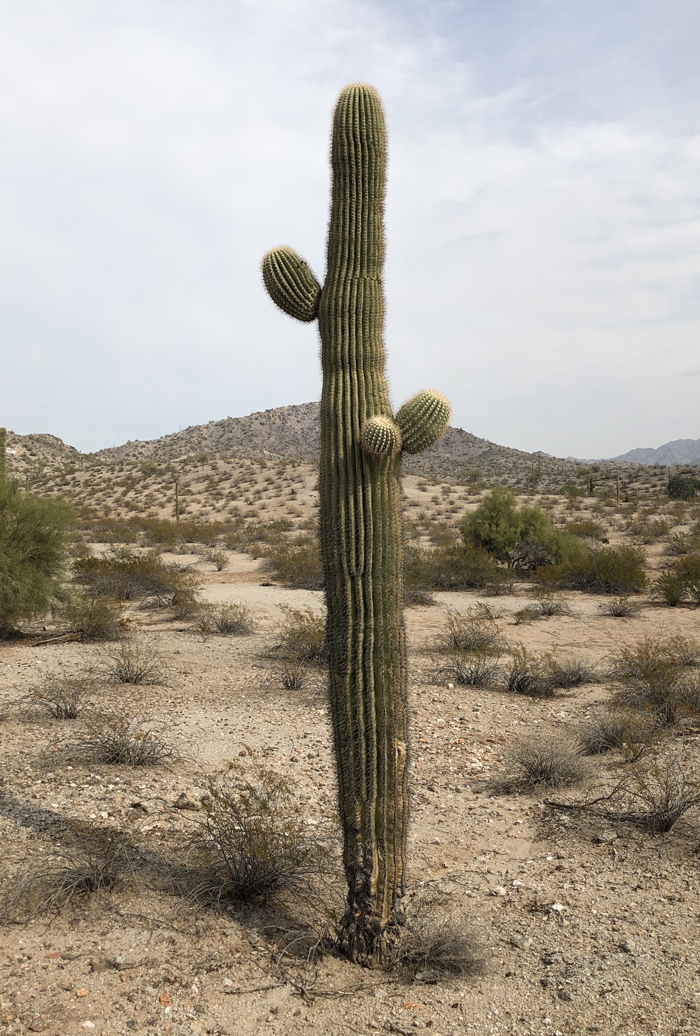 Pictured above is a saguaro cactus with three small buds that have just started to grow. 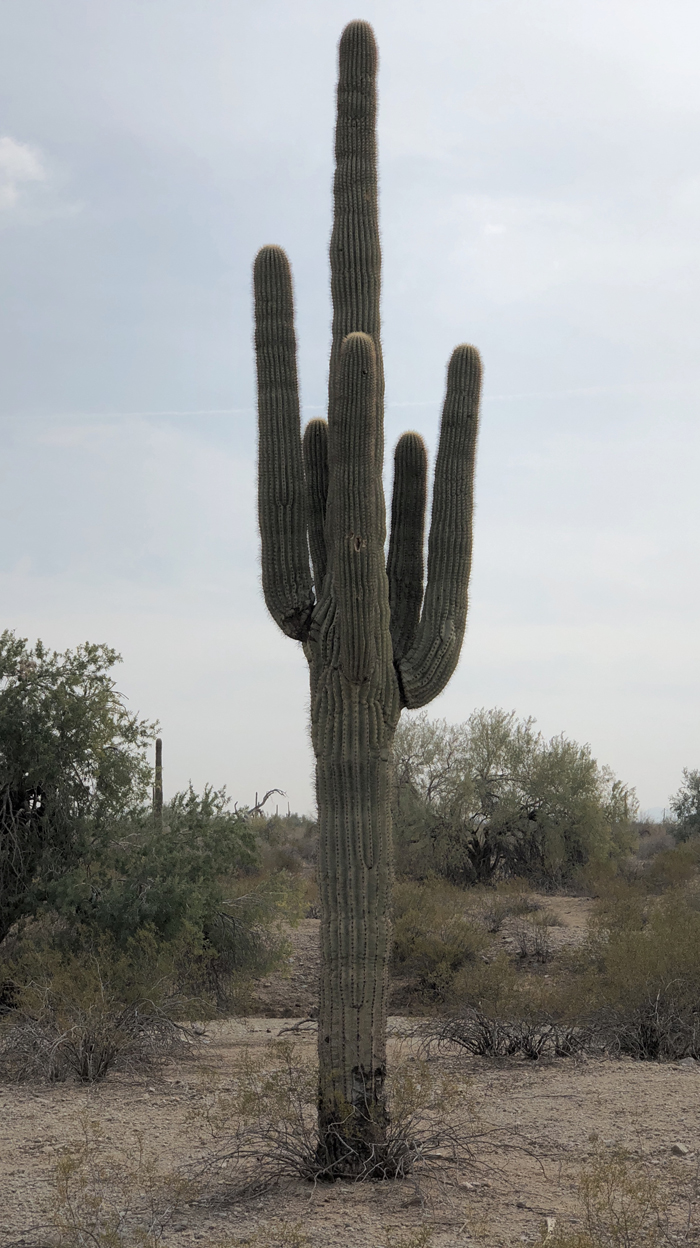 In time, those buds may grow to be very large, like arms, and create the iconic image (above) of a saguaro cactus. Arizona State University’s Alma Mater sings of this:

Where the bold Saguaros raise their arms on high,

Praying strength for brave tomorrows from the Western sky, 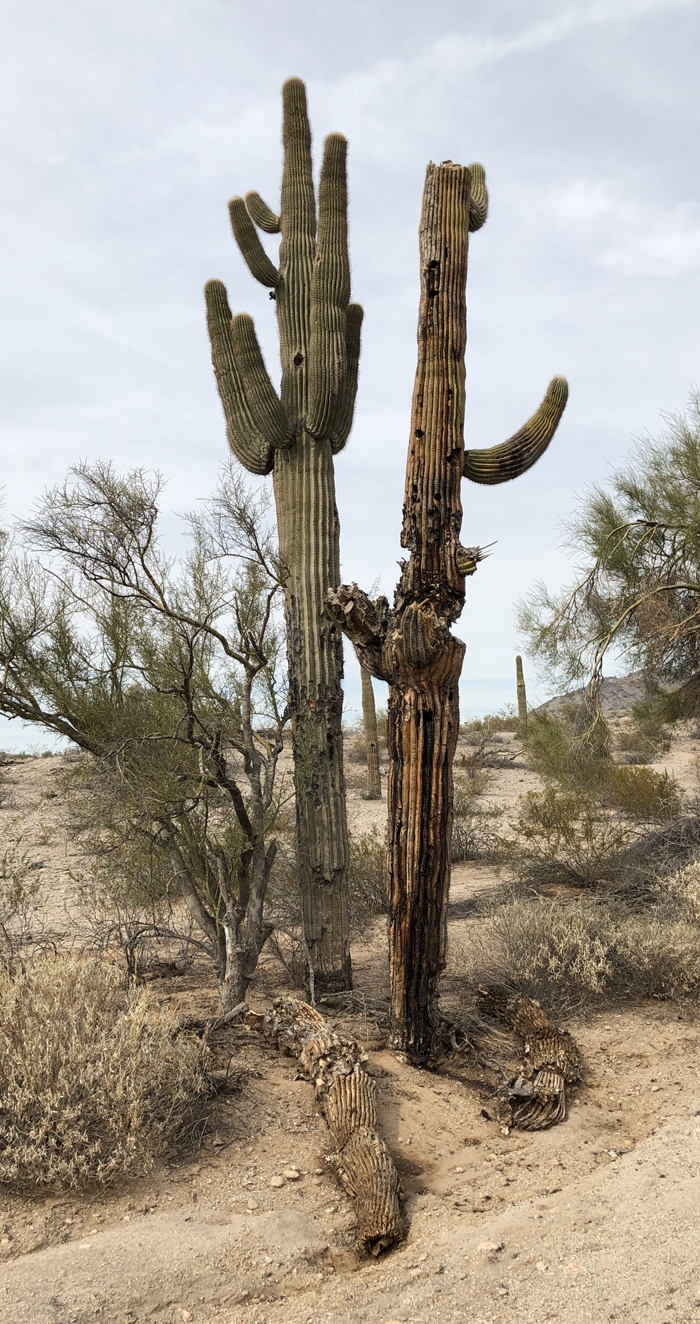 Eventually a saguaro changes as it nears the end of its life. This process may take many years. At first, the cactus will begin losing its needles and outer pulp, exposing the hard, stiff skeleton that brings water up from the ground to the entire cactus. In the photo above, you can see that water in the wash in the foreground — yes, this would be full of raging water when it rains — has eroded the bottom of the cactus and it is from the bottom that these cacti have begun to rot. Two cacti have already fallen, one remains in good condition, and one is showing the evolution of decay.

Eventually the saguaro falls. They usually break near their base and fall to the ground in the same shape in which they were standing, as seen in the photo above.

When the saguaro falls in an orderly way, its “bones” eventually are left exposed on the ground in a straight line. 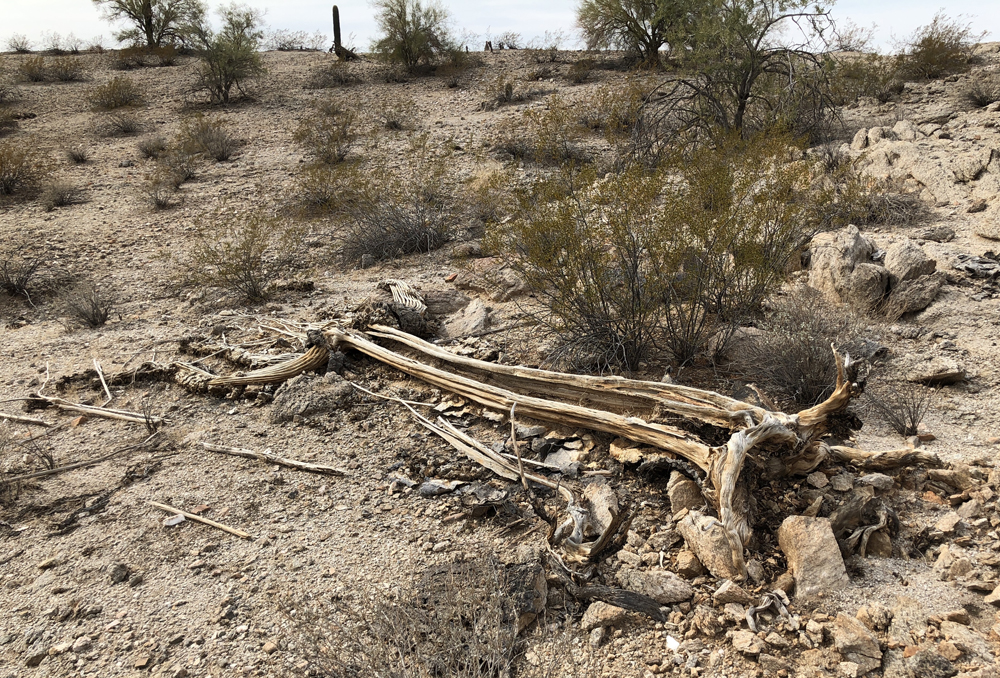 Sometimes, the saguaro falls in a chaotic way, uprooted by violent wind, with parts scattered around. 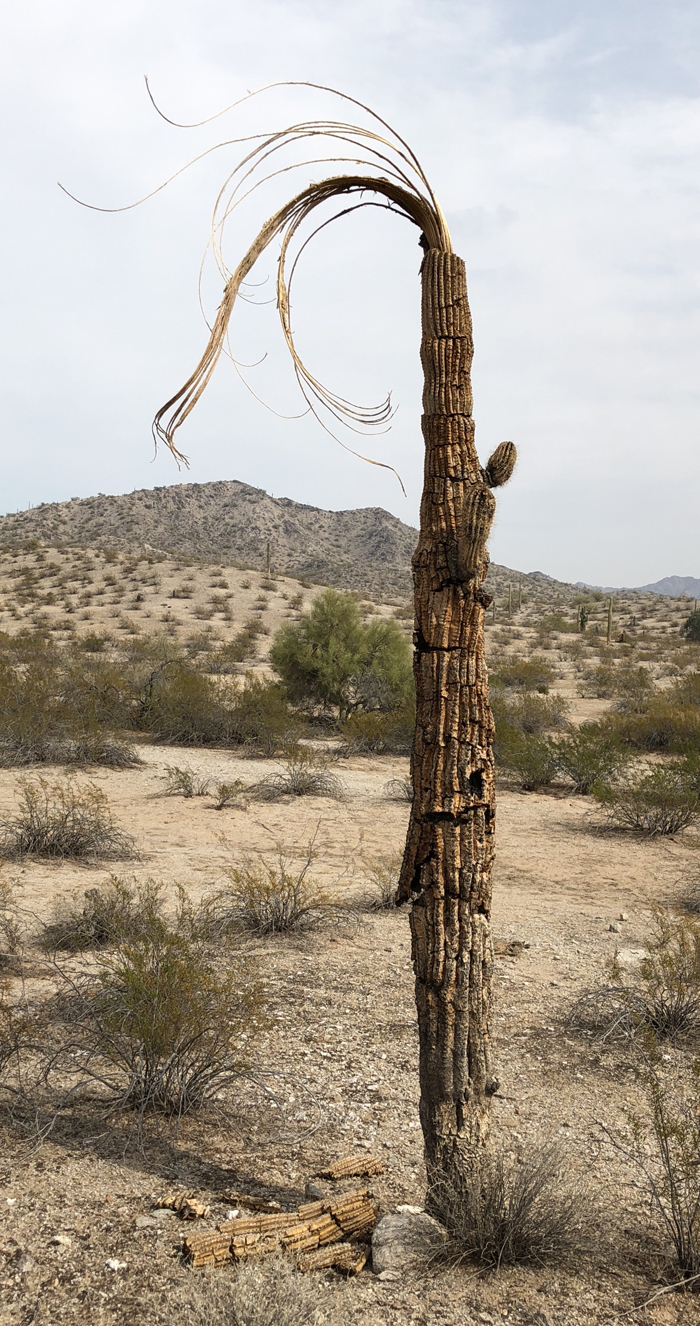 Other times, the cactus begins to die from its top and as it sheds its pulp, the bones begin to form beautiful shapes as they are pushed by the wind and their own weight. 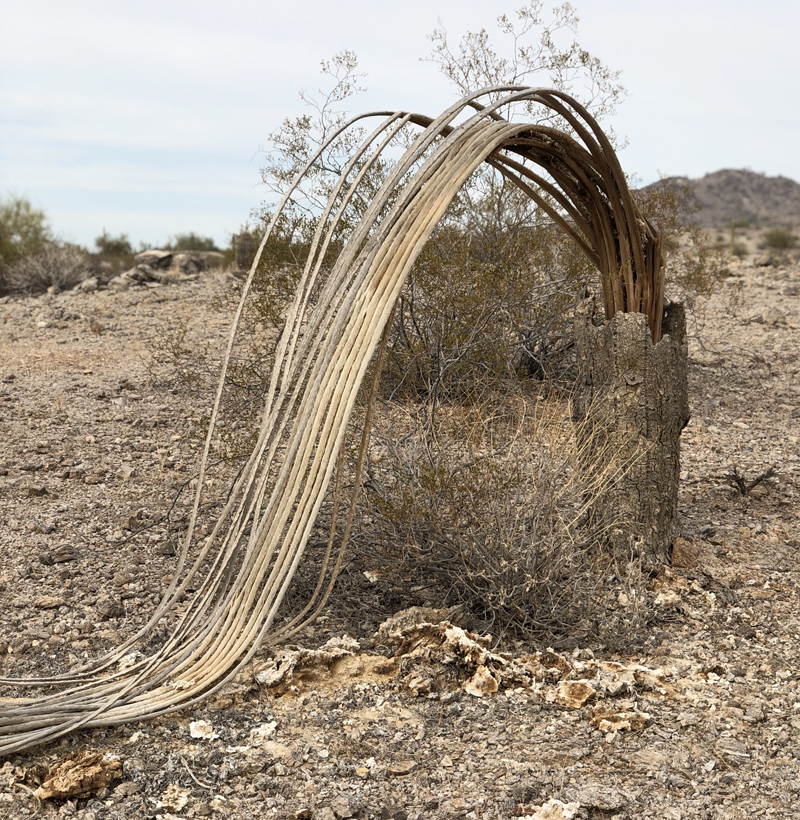 On rare occasions, the saguaro falls from its top into an elegant arch. This always reminds me of the St. Louis Gateway Arch, the gateway to the west. The beauty of these fallen saguaro arches is really something to behold.

Not all saguaros that fall in the desert decompose and go back to the earth. A few years ago, we purchased these saguaro bones (pictured above) that had been collected by a talented artist who did little more to them than saw the base so they could stand up. These bones — I think they look like organ pipes — stand in our living room. They remind us every day of the beauty and ever changing nature of God’s creation that is around us in this special place, the Sonoran Desert. 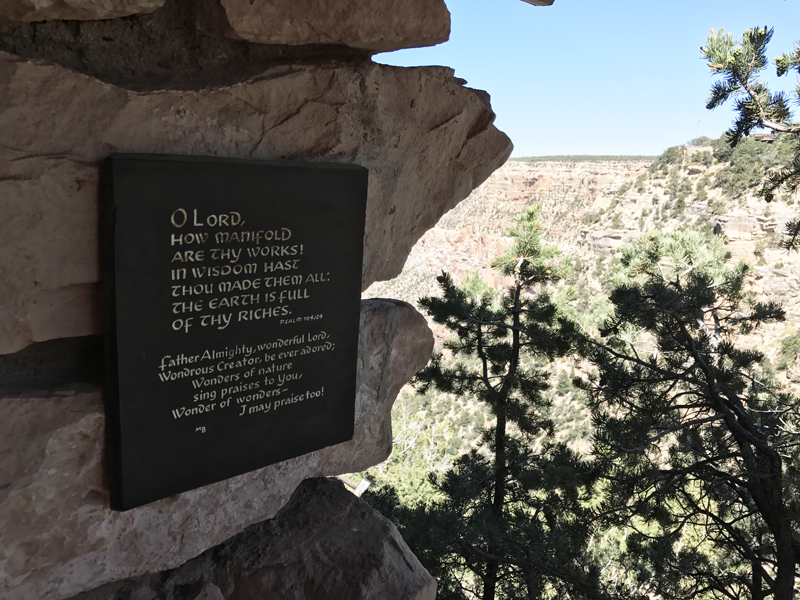 Photo in the header of this article: Estrella Mountains, Arizona.

Photo at the end of this article: Sign at Hermit’s Rest, Grand Canyon National Park:

O Lord, how manifold are thy works!

In wisdom hast thou made them all: the earth is full of Thy riches.

And below, a prayer:

Wonders of nature sing praises to You, Wonder of wonders –

I may praise, too!