It is a sign I have seen in front of my house only once before, in 2012, when I retired from the Boston Symphony and my wife and I sold our home in Lexington, Massachusetts. The sign tells a much larger story than its single word. But at the fundamental level, a SOLD sign means we are on the move again.

In 2010, we purchased a beautiful home in the Estrella community of Goodyear, Arizona. We knew that someday we would want to live in the southwest and that someday came in May 2012 when we left Massachusetts and moved into our home. We’ve enjoyed six years in this beautiful place. I have had a music room that I could only dream about, a place to play trombone, read, and write. 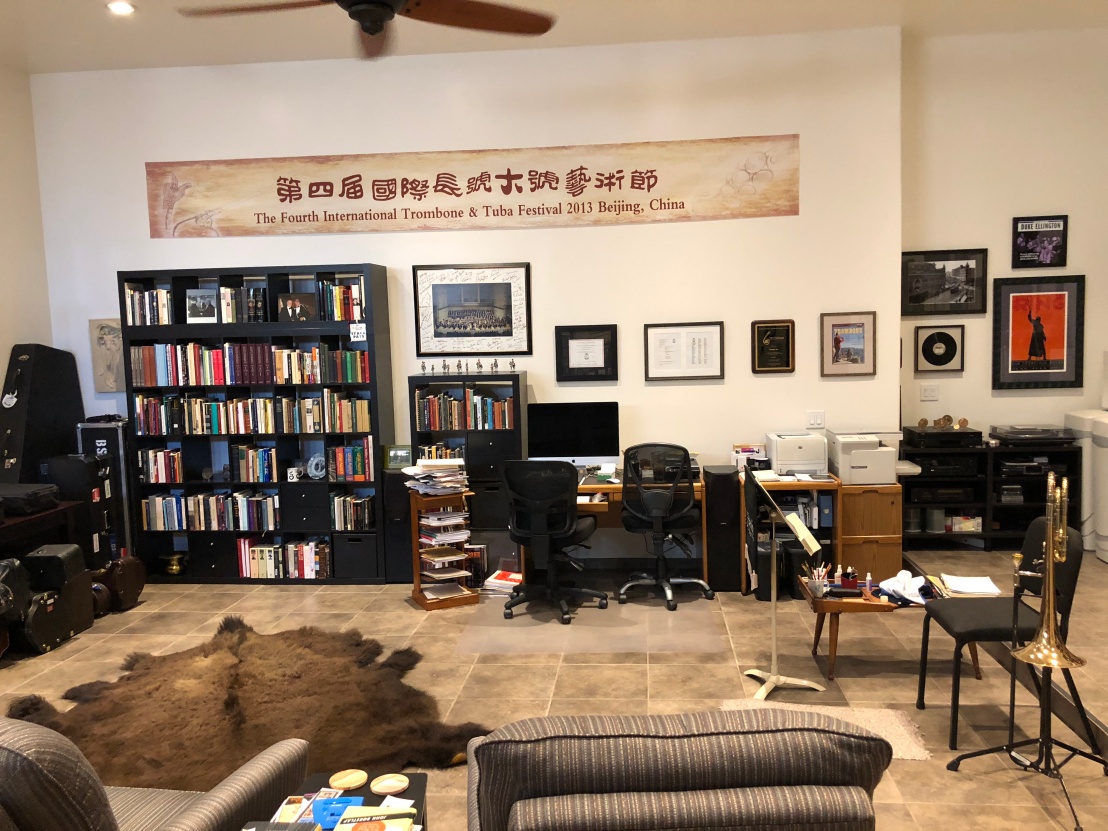 But today all of this is going away and we are moving to a new place. United Van Lines pulled up to our home yesterday and our driver, Amerigo, and his assistant, Justin, spent the afternoon taking inventory of our belongings. Today they returned, with three more men, and they are at work right now packing up a huge van with everything we own.

I have great respect for people and the work they do. Everyone does something. I play the trombone. Others pack up houses. To see Americo and his crew at work is to see people who have strength, knowledge, understanding, and creativity. It is not easy to fit 500 boxes, pieces of furniture, and other items into a rectangular truck. And get everything safely to a new destination. But as I watch them carefully wrap furniture and systematically fit things into the truck, I have to smile. These guys know what they are doing. They are, in their own way, artists.

In March, we made the big decision to leave Arizona and move to a western suburb of Chicago. Into a much smaller house. Back to winters of cold and snow. I confess that I never imagined we would leave Arizona, a place that we have loved in so many ways. But there was only one thing that could lead us to make this big decision.

When we made the decision to purchase our home in Arizona in 2010, these two precious ones were not a part of our lives. But all of that changed a few years ago as first Hannah, and then Caleb, were born. As time has marched on, we have enjoyed many visits with them both here in Arizona and in Illinois where our oldest daughter and her family live. But several visits a year and daily FaceTime calls are not enough. Our hearts wanted more. After they visited us in March of this year for a week of Chicago Cubs baseball spring training, I turned to my wife, Pat, and dropped a big one: let’s leave Arizona and move to Illinois. I never imagined those words would come from my mouth. But it seemed that God was prompting us to do something radical, something completely unexpected but at the same time quite wonderful. At first I thought that we would consider moving near to our grandchildren at some undefined time in the future. That rapidly changed to considering doing “the snowbird thing” – living in Arizona in the winter and in Illinois in the summer. But when we ran the numbers, it just didn’t make good, prudent fiscal sense. And we concluded that if we were in Illinois for half the year, we’d miss so many things that happened there in the other half of the year. So in a short time – just a few weeks – we decided to purchase a home in Illinois just 10 minutes from Linda and her family. Since then we have done an extreme makeover of our new place and it will be ready for us when we arrive there in a few days.

So, here we go. Back to Illinois, near Wheaton, where Pat and I were undergraduates at Wheaton College in the early 1970s. Back to the land where I met my trombone teacher and mentor, Edward Kleinhammer (bass trombonist of the Chicago Symphony, 1940-1985). Most of all, we are heading to a place where we can be a bigger part of the lives of our precious grandchildren. Anyone who has grandchildren will surely appreciate what I am saying here.

Yes, I will miss Arizona. But we will be back. We have much more left to explore in the southwest. But no matter how much we love being here, we know that the old adage “family first” is true. We have no regrets about leaving; we are moving ahead, looking to the future with great anticipation.

This morning I watched the sun rise for the last time from the roof of our home. As it rose over the Estrella Mountains, I felt such gratitude to God for the opportunity to have lived here for the last six years. I have learned so much, and I will share some of that in future articles on The Last Trombone. By the end of the day today, our home in Arizona will be empty. Next Friday, Amerigo and his truck will pull up to our new home in Illinois and a few hours later, it will be full. Soon, the sound of the laughter of children will ring in its rooms. There are no words in the English language that mean more to me than, “I love you, grandpa. I love you, grandma.” That is why we are leaving Arizona. God is good. 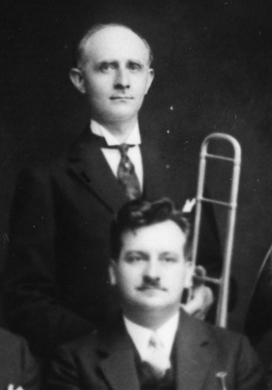 The name Joannès Rochut has been known to generations of trombone players around the world, thanks, in part, to the three volumes of Vocalises of Marco Bordogni that he arranged for trombone. Published as Melodious Etudes for Trombone Selected from the Vocalises of Marco Bordogni, Rochut’s books were published in 1928 by Carl Fischer of New York City. The date is significant: it was during Rochut’s tenure as principal trombonist of the Boston Symphony Orchestra from 1925-1930 that he published the books that made his name so famous to trombone players. Most players today are unaware that Rochut played in the Boston Symphony, and his tenure in Boston will be the story of a subsequent article on The Last Trombone. 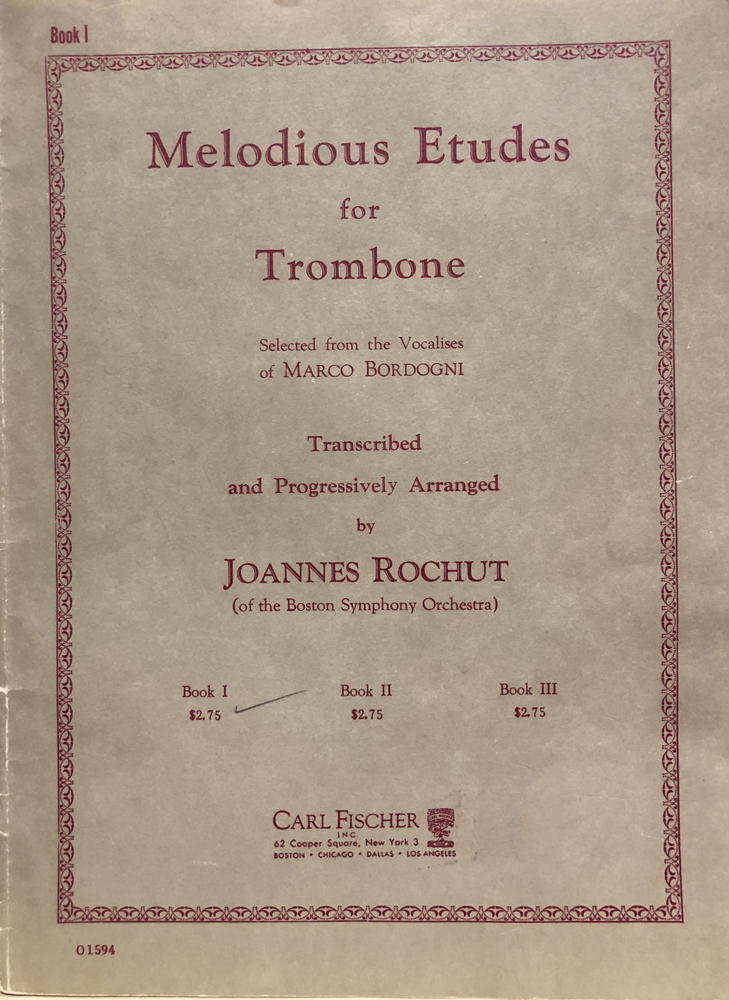 But if most players today are unaware of Rochut’s connection with Boston, those who first bought his Melodious Etudes certainly knew about it, since his affiliation with the orchestra was printed on the cover of the Melodious Etudes. See the photo above of my early copy of Book I.

There is something about Rochut’s books that has puzzled many trombone players and scholars. Rochut transcribed and arranged 120 of Bordogni’s Vocalises. 119 of them have been identified in Bordogni’s works. But No. 1 of Book I has never been found in Bordogni’s oeuvre. So who wrote it?

Many people have assumed that Rochut composed this etude. It happens to be one of my favorite exercises in Book I and I, too, have puzzled over this, wondering who wrote it. [As an aside, note that Rochut’s first name is spelled “Joannès.” Unfortunately, Carl Fischer’s new edition of “the Rochut book” does not spell his name correctly, but that is a story for another time. . .]

A few months ago, the mystery solved itself. A needle in a haystack surfaced as I was doing research for one of the books I’m writing at this time. I had some correspondence with Gary Spolding about his planned edition of Bordogni for trumpet and we discussed “Rochut No. 1.” As a result of our conversation, I located a copy of 26 Etudes Techniques d’apres Bordogni by Louis Allard and Henri Couillaud.

Published in Paris in 1927 – a year before Rochut’s Melodious Etudes – Allard and Couillaud’s book contains original exercises in the style of Bordogni. And on page 12, exercise 11 is found:

Louis Allard and Henri Couillaud were trombone professors at the Paris Conservatoire; Allard from 1888-1925 and Couillaud from 1925-1948. Rochut studied with Allard at the Conservatoire; in fact, Rochut won the first prize in trombone there in 1905, playing Sigismond Stojowski’s Fantasie.

Spend a few minutes with Allard and Couillaud’s printing of their etude, above; there are some significant differences between it in their book and the way it was reprinted in Rochut’s book (including tempo, dynamic, a different note, and phrasing, as well as the repeat).

Now, the hunt is on to find Allard and Couillaud’s original piano accompaniment to Etude 11. Another haystack; another needle to be found.

[Photo at the top of this article: Joannès Rochut (standing) with his Lefevre trombone, and Georg Wendler (seated, horn), 1926. Detail from a photo of the Boston Symphony Orchestra brass section, 1925.]