I have been to Japan more times than I can count — maybe 12 or 13 times — and on my many trips, I have always had a trombone in my hand. During my nearly thirty years as bass trombonist of the Boston Symphony, I took part in many Boston Symphony and Boston Pops Orchestra tours to Japan, conducted by Seiji Ozawa and John Williams. The first of these tours, in 1986, led to my introduction to YAMAHA, which resulted in the beginning of my long, productive, and happy relationship with the company and its people. Together we have worked to develop the YAMAHA YBL-822G bass trombone and YAMAHA Douglas Yeo Signature Series Mouthpiece that I have been playing for decades.

I have also traveled to Japan many times to serve on the faculty of the Hamamatsu International Wind Instrument Academy and Festival, an annual event that brings together an international group of teachers and performers to work with talented students. Sponsored by YAMAHA and the City of Hamamatsu, times working at the Academy have been memorable.

Next week, I will return to Japan once again, as the guest of the Nagoya Trombone Festival, sponsored by the Nagoya Trombone Association. During the two day Festival, I will play a recital (accompanied by a superb pianist, Shoko Gamo), perform as soloist with a trombone ensemble, conduct two trombone ensembles, and give a lecture on the history of the trombone. Here are a few more details:

One of the special joys of this trip will be to see my former student, Nozomi Kasano Flatt, who plays bass trombone in the Japan Century Orchestra in Osaka. I met Nozomi in 2004 at the Hamamatsu Academy where she was a student in my trombone class. She subsequently came to Boston where we worked together for three years and she received her Graduate Diploma and Master of Music Degrees at New England Conservatory. I am exceptionally proud of Nozomi and all of her accomplishments and in 2014, she served as my translator for my class at the Hamamatsu Academy. Next week, she will be my translator once again, and we will also play a duet on my recital.

One of the pieces I will play on my recital is an arrangement of a Canzone by Frescobaldi by Eddie Koopman. Koopman’s electronic accompaniment gives a new flavor to this piece from the Renaissance and to inject something different into my recital, I will play it on a buccin, a dragon bell trombone. In 2015, I gave a recital at the Hamamatsu Museum of Musical Instruments and played this piece on a buccin made by YAMAHA. It’s a great instrument, made by YAMAHA factory workers in their spare time. It’s very nice of YAMAHA to let me use this instrument once again in Nagoya where I will be able to bring a very different kind of trombone sound to the audience.

In addition to my work at the Nagoya Trombone Festival, I will also give a masterclass at Aichi Prefectural University. While there, I will work with several talented young trombonists and also have an informal talk with the students about my life in music. Here is a poster with some more information about my time at the University. 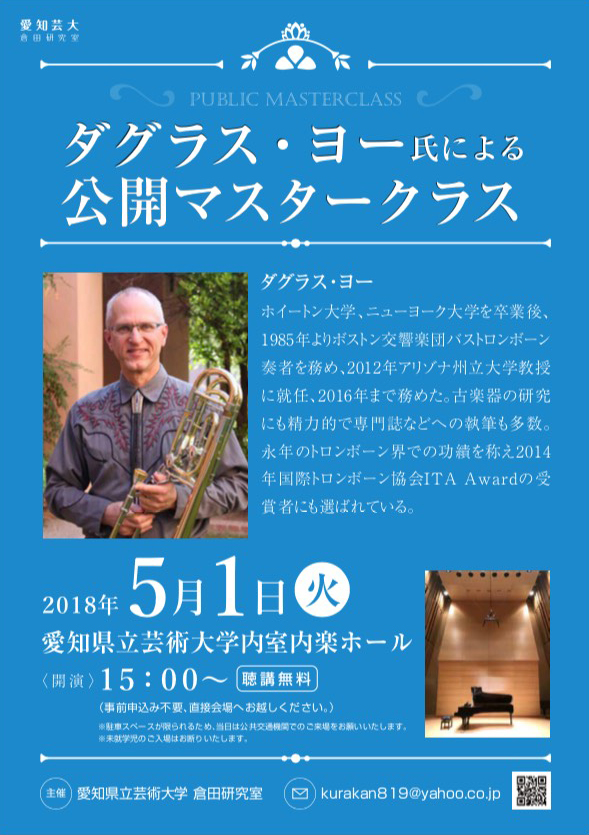 Texas. It’s a big state. And it has a lot of trombone players.

Next week I’ll be in the Lone Star State, giving masterclasses and performing at University of Texas, Austin (Dr. Nathaniel Brickens, Professor of Trombone) and Texas Christian University (Dr. David Begnoche, Associate Professor of Trombone). I’ve been to these two schools and worked with these fine teachers on previous occasions; it has always been a joy and pleasure to work with their students and enjoy time together.

If you find yourself in Austin or Fort Worth, Texas next week, come on by to some of the events listed below. Here’s a flyer with some of my University of Texas, Austin activities:

I’d also like to say that I’m very grateful to YAMAHA Corporation of America for their kind sponsorship of my appearance at these Texas events. For information about the YAMAHA YBL-822G trombone that I play — I began my very happy relationship with YAMAHA in 1986 — click HERE.