Today is Easter. It is a day that remembers an event of monumental importance: the resurrection of Jesus Christ. The story has been told countless times, and Christians around the world celebrated Easter with song, sermons, and the reading of Scripture. Today, my wife and I sang in the choir at our church, College Church in Wheaton, Illinois, where we brought the Credo — the Nicene Creed — to our congregation in the monumental setting by Johann Sebastian Bach as found in his Mass in B-minor.

There are four accounts of the death and resurrection of Jesus in the Gospel accounts in the Bible – Matthew, Mark, Luke, and John. Each highlights particular moments in those world-changing days nearly 2000 years ago. In 2016, my wife and I traveled to Israel with a tour group sponsored by our undergraduate alma mater, Wheaton College. The trip was life changing, as we visited many of the traditional sites where pivotal events in the Bible took place. One such site was the Church of the Holy Sepulchre, built over the traditional sites of the crucifixion and burial of Jesus. The photo at the top of this blog entry on The Last Trombone is one I took of the tomb of Jesus in the Church of the Holy Sepulchre. Do we know for sure that he was actually buried there? No, but since at least around 400 AD, Christian pilgrims have venerated this particular place as being the site. I do not engage in debates over whether this or that site is THE site. It enough that I was in the neighborhood.

Artists over the centuries have depicted the resurrection of Jesus as a cataclysmic event, replete with angels and earthquakes, and the moving away of the stone that covered the entrance of the tomb. The Bible tells of this (Matthew 28:1-4):

And behold, there was a great earthquake, for an angel of the Lord descended from heaven and came and rolled back the stone and sat on it. His appearance was like lightning, and his clothing white as snow. And for fear of him the guards trembled and became like dead men.

Typical of such artistic representations is the one below that I saw a few days ago at the Art Institute of Chicago.

The painting is by Cecco del Caravaggio, whose real name was Francesco Buoneri, and it was painted in 1619-1620. Christ appears on top of his tomb, and an angel is dispatching Roman soldiers who were guarding the tomb. Cecco’s use of light and dark is exceptional, and I spent a long time sitting in the museum’s gallery and contemplating the event that it depicts.

But in 2017, when my wife and I traveled to Italy on another Wheaton College alumni tour — a tour that took us to Florence and Rome — I saw another painting of the resurrection that has stuck in my mind ever since. This painting was in the Galleria dell’ Accademia in Florence, in the same museum that houses Michelangelo’s iconic statue of David. The painting, by Andrea del Sarto, was painted in the early sixteenth century and presents a very different view of the resurrection of Christ. 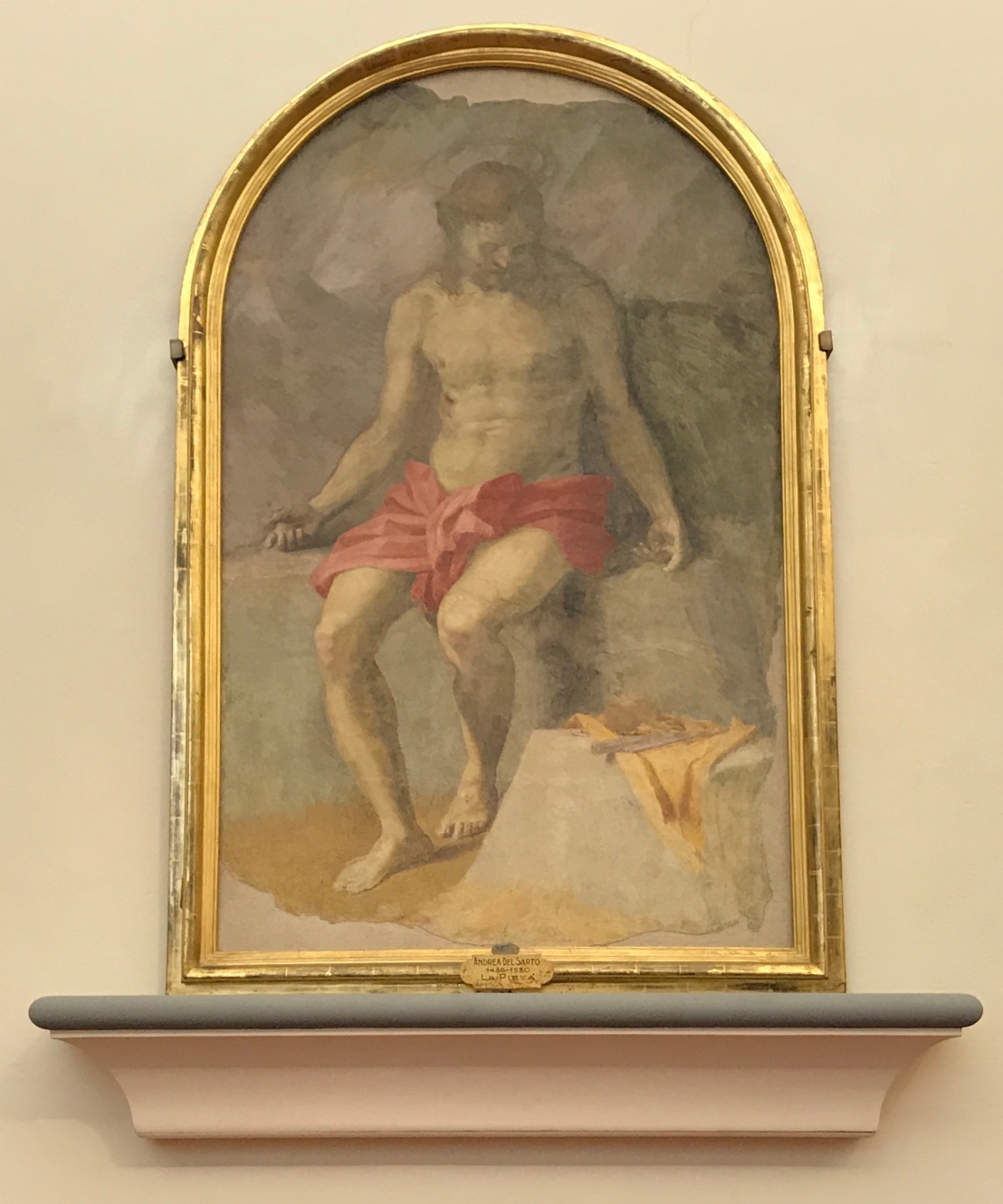 Here is a moment before the the earthquake; we see no guards, no angel. It shows Jesus in His tomb at the moment of his resurrection. The wounds from his crucifixion are visible, as are some of his burial cloths. The image is one of quiet contemplation. I am sure I was not alone, when standing before this painting, in asking the question: What was Jesus thinking at this moment?

What I find interesting in all of this is that the Bible is silent about what actually happened inside the tomb at the moment when Christ was raised from the dead. He was dead, buried in the tomb. Then at some point over the next two days, Christ was resurrected, and somehow, in some way, he left the tomb. Two days after his agonizing death on the cross, the tomb was empty. Mary Magdeline was shocked to see the tomb empty when she came to visit it two days after the crucifixion of Jesus, but an angel spoke to her with these earth-shattering words (Matthew 28:6):

He is not here, for he has risen.

I like to meditate on both of these paintings which depict two moments surrounding the resurrection of Jesus. Both speak to the same thing: Jesus was dead, buried, and was raised from the dead. In the days and weeks that followed, He appeared in physical form — not as some kind of ghost or apparition — before hundreds of people. This is documented not only by the Bible, but by other, independent writers. The resurrection of Jesus happened. It was and is true, and it changed the world and the life of every person in it. As the Apostle Paul reminds us (1 Corinthians 15:17-20):

If Christ has not been raised, your faith is futile and you are still in your sins. Then those also who have fallen asleep in Christ have perished. If in Christ we have hope in this life only, we are of all people most to be pitied.

But in fact Christ has been raised from the dead.

C. S. Lewis spoke to this fact in his book, Mere Christianity. I have previously quoted him in my article on The Last Trombone about Christmas, but his words are worth repeating here:

I am trying here to prevent anyone saying the really foolish thing that people often say about [Jesus]: “I’m ready to accept Jesus as a great moral teacher, but I don’t accept his claim to be God.”

That is the one thing we must not say. A man who was merely a man and said the sort of things Jesus said would not be a great moral teacher. He would either be a lunatic — on the level with the man who says he is a poached egg — or else he would be the Devil of Hell. You must make your choice.

Either this man was, and is, the Son of God, or else a madman or something worse. You can shut him up for a fool, you can spit at him and kill him as a demon or you can fall at his feet and call him Lord and God, but let us not come with any patronizing nonsense about his being a great human teacher. He has not left that open to us. He did not intend to.

The death of Jesus Christ. His burial. His resurrection. It happened. And it matters. Happy Easter.