I don’t own many things that date from my childhood. I moved many times, collected other things, have lived a long life, and things that seemed so important when I was a kid mostly got lost along the way. I do wish I still had those baseball cards, though. . . But one of the few things I do have from that time in my life is a Boston Symphony recording of Mendelssohn’s “Reformation” Symphony, conducted by Charles Munch. I bought it in 1970 when I was 15 years old.

[As an aside, this album cover shows the Arch of Titus in Rome, with the Colosseum in the background. During my wife’s and my recent trip to Italy, we stood in this very place, and noted the significant connection the Arch has with our trip last year to Israel. More on this in an upcoming article on The Last Trombone.]

That I ended up being a member of the Boston Symphony for 27 years (1985-2012) is one of the great joys of my life, and in a sense that was the fulfillment of a long held dream since I was in high school. Several Boston Symphony recordings were very influential on me at an early age when I was just beginning to understand the trombone, and this Mendelssohn recording stands tall in my record collection. In fact, one of the first orchestra scores I ever purchased was of this symphony; I purchased it a few days after I heard Munch’s recording for the first time (the first page of the final movement of my score is shown at the top of this article).  Click below to hear that recording that influenced me so deeply so long ago (to hear this recording in YouTube, click here):

I have always loved this piece. It has a terrific part for bass trombone; just a few measures in the beginning of the symphony and then much to do in its finale. I first played the symphony on bass trombone with the BSO conducted by then-music director, Seiji Ozawa; the photo below shows Seiji and me in 1994 before a rehearsal for Hector Berlioz’s Messe solennelle; you’ll see I have my serpent in my hand. For more on that, keep reading.

After I took up the serpent, I played the serpent part for Mendelssohn’s symphony in performances with the BSO conducted by the great early music conductor, Ton Koopman; the photo below shows us backstage at Boston’s Symphony Hall before a rehearsal in 2004.

Mendelssohn’s “Reformation” symphony – it usually bears the number 5 in the numbering of his symphonies but it was not his fifth in order of composition – was composed in 1830 to commemorate the 300th anniversary of the Augsburg Confession, one of the great confessional documents of the Christian faith. The theme of the symphony’s fourth movement is none other than Martin Luther’s famous hymn, Ein feste Burg est unser Gott — A Mighty Fortress is Our God. I wrote about this hymn last year on The Last Trombone, where I took the opportunity to discuss the importance of its text, especially the its fourth, final verse. I invite readers to look at that article again; click here.

Last week, I played serpent in a performance of the “Reformation” Symphony by the Northbrook Symphony near Chicago. My oldest daughter, Linda Yeo Leonard, plays bass trombone in the Northbrook Symphony, and my wife and I have heard many concerts played by the orchestra. When the orchestra’s conductor, Lawrence Rapchak, asked me if I would be available to play serpent in their performance of Mendelssohn’s symphony – performed on a concert with other symphonies in the key of D but also in recognition of the 500th anniversary of the beginning of the Protestant Reformation – it was easy to say yes. 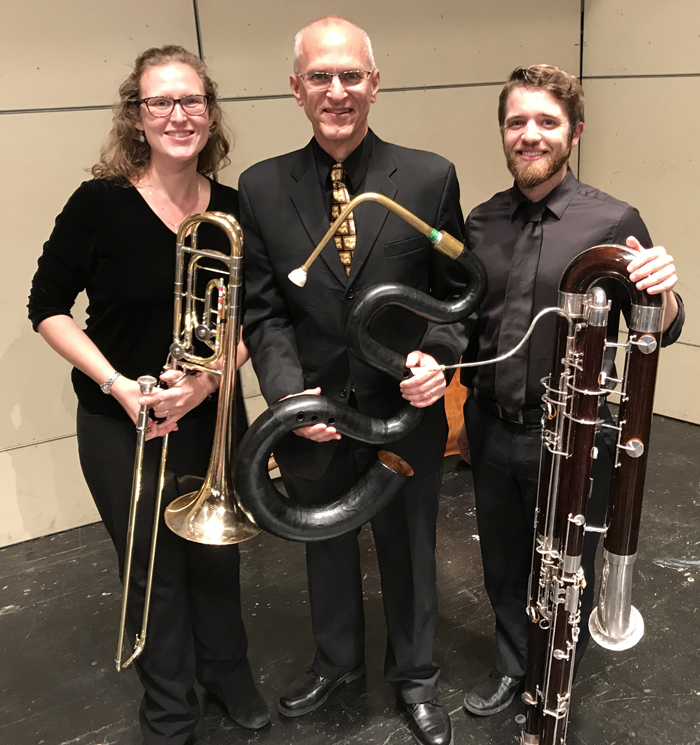 The photo above shows Linda and me along with the Northbrook Symphony’s fine contrabassoon player, Nicholas Ritter; Nick and I sat next to each other on stage with Linda seated just behind me. Mendelssohn’s part for the serpent doubles the contrabassoon at the octave and the result is a new kind of bass sound, caused by the acoustical blending of the two instruments. Murray Campbell wrote an article several years ago about this unique sound in an article for the International Tuba Euphonium Association Journal; you can read it by clicking here. The performance was a great success in every way, and it was a special joy to sit on stage with Linda.

There have been other recent connections to Luther that have recently gotten my attention. As mentioned earlier, my wife and I were in Italy last month, enjoying the glories of Renaissance art and their connections to the Christian faith. Among the places we visited was the Ufizzi Gallery in Florence, one of the world’s great art museums. As we were going through various galleries, we came across a painting of Martin Luther and his wife, Katharina von Bora, painted by the workshop of Lukas Cranach the Elder in 1529. The portrait was made when Luther was still alive (1483-1546) and is considered to be a true likeness. 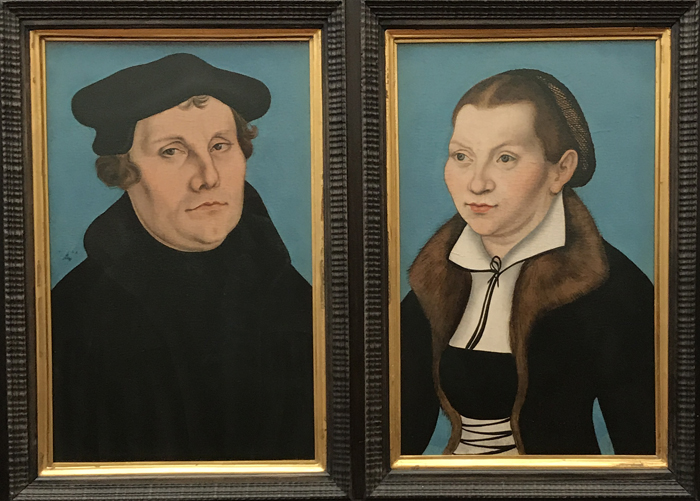 As I enjoyed this iconic painting – it is the most famous portrait of Luther – I noticed that the museum’s display card had a curious final sentence:

Of course the Medici family was one of the most famous and influential families of the Italian Renaissance, and they were strong patrons of the arts. But this sentence got my attention. “Why,” I wondered, “did the Medici family, who were Roman Catholics and whose family produced three Popes (Leo X, Clement VII, and Leo XI), own this portrait of the most famous Protestant reformer?” I can’t answer that question, but I’ve been wondering about this.

Last Sunday, I worshiped at Trinity Lutheran (LCMS) Church in Lisle, Illinois, where Linda’s family are members and her husband, Chad, a Lutheran pastor and hospice chaplain, coordinates the church’s care ministries. This year, the Lutheran Church – and Protestant churches of all denominations – is celebrating this 500th anniversary of the beginning of the Protestant Reformation – dated to October 31, 1517 when Luther attached his famous Ninety-Five Theses on the door of All Saints’ Church in Wittenburg, Germany, and set off a reform movement in Christianity that is still with us. When I sat down in our pew on Sunday and opened my bulletin, what did I see but an insert about Luther and the Reformation with a stylized version of the very same portrait of Luther we had seen in Florence. It was a nice, serendipitous moment.

The Protestant Reformation changed history, and this convergence of events – Mendelssohn’s symphony, our trip to Italy, seeing a famous portrait of Martin Luther in Florence, and worship in a Lutheran church – brought many aspects of its importance together for me.

When I was a student at Wheaton College (Illinois), I memorized Luther’s great hymn. It got me extra credit on an exam in the class, “Christ in Culture,” and I needed all the extra credit I could get. I don’t remember how I did on that test, but I still call A Mighty Fortress to mind every day. It is a hymn of great strength and comfort, and Luther’s words are just as relevant and important today as they were nearly 500 years ago when he wrote the text. Here is its second verse; to read the whole text and my commentary on Luther’s original words, click HERE.

Did we in our own strength confide, our striving would be losing,

Were not the right Man on our side, the Man of God’s own choosing.

Dost ask who that may be? Christ Jesus, it is he;

Lord Sabaoth his name, from age to age the same;

And he must win the battle.