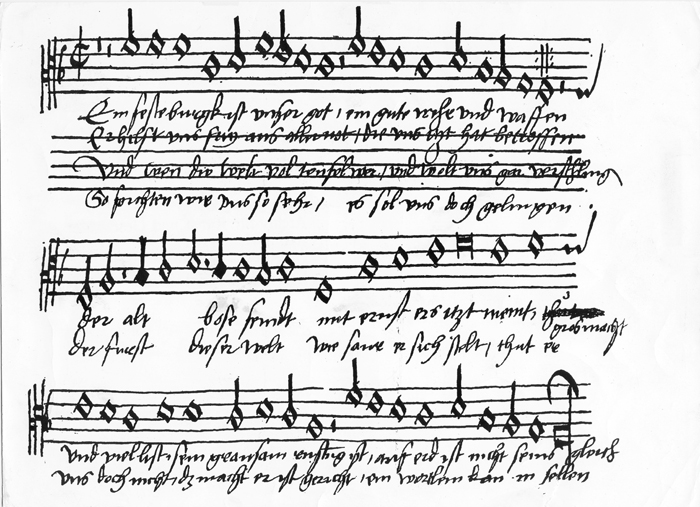 Today, October 31, is Reformation Day, commemorating the 499th anniversary of the beginning of the Protestant Reformation. The day is associated with Martin Luther’s Disputation of Martin Luther on the Power and Efficacy of Indulgences which became popularly known as the 95 Theses. Luther sent this document to the Archbishop of Maenz, Albert of Brandenburg,  on October 31, 1517, and a few days later,  posted it on the door of the Church of All Saints in Wittenberg, Germany. This event is considered to be the spark that led to the Protestant Reformation, a major reform movement in the Christian church.

In our church’s worship service yesterday morning, we sang Luther’s great hymn,  Ein feste Burg ist unser Gott, usually translated into English as A Mighty Fortress Is Our God. The image above shows the original version of the tune in the handwriting of Luther’s friend, Johann Walter. Luther composed the words and melody sometime between 1527 and 1529 and it has been used in churches around the world since that time, in particular since Frederick Hedge made his English versification in 1853. It was also used by Johann Sebastian Bach in his Cantata for Reformation Day, BWV 80.

When I was a student at Wheaton College, I memorized the four verses of this hymn for extra credit in a class. While I was grateful for the extra credit, I’m very glad I took the time to memorize A Mighty Fortress. I call it to mind every day.

Translations of texts into English that originally appeared in other languages help us to sing songs with understanding. But in the case of A Mighty Fortress, the standard English translation of the fourth verse has always struck me as being overly pleasant; it does not truly reflect the seriousness of Luther’s original text.

Here is what we often find in English hymnals for the fourth version of A Mighty Fortress Is Our God:

That word above all earthly powers, no thanks to them, abideth;

The Spirit and the gifts are ours through Him who with us sideth.

The body they may kill; God’s truth abideth still:

His kingdom is forever.

This is all well and good, but the phrase, “Let goods and kindred go, this mortal life also,” sounds like we should simply let things go – let go of things, even our own lives, since they are, in the big scheme of things, not as important as knowing that one is a Child of God.

But Luther’s original German text includes something very important. A better, more literal rendering of this verse in English looks something like this:

That word they must let stand, no thanks to their own efforts.

He is with us indeed according to the plan, with his Spirit and gifts.

Though they take from us our body, possessions, honor, child and wife,

Let them have all these things; they gain nothing from them:

There still remains for us the Kingdom.

Do you see the difference? It’s not a matter of just “letting things go.” No, THEY TAKE FROM US OUR BODY, POSSESSIONS, HONOR, CHILD AND WIFE. They will come for you and all that you hold to be dear. Persecution WILL come. The things that are most valuable and important to us – including our own lives – are not simply things that we will have to let go of. No. They will be taken from us. Yet God, who rules over this fallen, messed up world, reminds us that even when you have lost everything, you still have the most important thing: the Kingdom of God. This is a tremendous comfort for the Christian.

We live in troubling times. Increasingly, in some parts of the world, to speak of the Christian faith leads to persecution, even death. Luther’s great text reminds us of this; it is as fresh today as when it was written centuries ago.

Luther’s first verse, as it usually appears in English, is a good translation that captures the original intent of the text even as it is in rhyming verse, and it is a great reminder for those who know and follow Christ. Amidst the craft and power of the ancient foe, the evil one, Satan himself, God is our refuge and strength, a very present help in time of trouble (Psalm 46:1):

A mighty fortress is our God, a bulwark never failing;

Our helper He amid the flood of mortal ills prevailing.

For still our ancient foe, doth seek to work us woe –

His craft and power are great, and, armed with cruel hate,

On earth is not his equal.

Likewise, the second verse – and this is the verse I call to mind every day – tells us who it is that will conquer this evil one:

Did we in our own strength confide, our striving would be losing,

Were not the right Man on our side, the Man of God’s own choosing.

Dost ask who that may be? Christ Jesus, it is he;

Lord Sabaoth his name, from age to age the same;

And he must win the battle.

Today, the 499th anniversary of Reformation Day, reminds us that in the midst of the trials and tribulations of life, God is there, our mighty fortress.