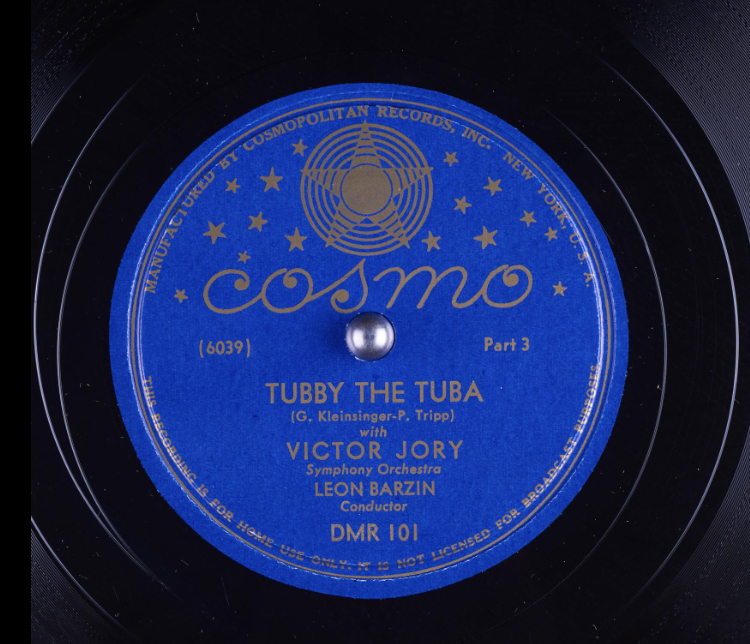 Among my many projects that are happily occupying my time is my work on several book projects. One of them is An Illustrated Dictionary for the Modern Trombone, Euphonium, and Tuba Player, to be published by Rowman & Littlefield. This is a very interesting project for me: to come up with about 600 terms (instruments, instrument parts, accessories, composers, companies, players, etc.) that low brass players might want to know more about. It is a dictionary, not an encyclopedia, so my entries are necessarily brief, but an extensive bibliography will help readers know where to go to get more information.

The book will be illustrated by my friend, Lennie Peterson, a trombonist and artist living in Boston but who works around the world. Many readers of The Last Trombone already know Lennie even if they don’t know him: I’d venture to say that any readers who are trombone players have seen Lennie’s most famous cartoon from the many years when his syndicated daily cartoon, “The Big Picture,” was part of newspapers around the country.

But Lennie is also a superb fine artist, and his illustrations for my new book will add measurably to help readers understand my words even better.

Over the last few days, I’ve been researching an entry for my book, about the piece,  Tubby the Tuba. Many readers probably know about this charming work for orchestra, narrator, and tuba. But it wasn’t until I actually sat down to research it that I found some very interesting things that I’d like to share with readers.

Tubby the Tuba was written by George Kleinsinger (music) and Paul Tripp (story). Tubist Herbert Jenkel asked Kleinsinger to write him a concerto for tuba and Tubby was the result. Kleinsinger and Tripp began their collaboration for Tubby in 1941 but World War II interrupted their work. They finally finished it in 1945 and it was premiered the following year in a concert by the American Youth Orchestra conducted by Dean Dixon with tubist Herbert Wekselblatt (who went on to be tubist with the Metropolitan Opera Orchestra for many years). The first performance of Tubby by a professional orchestra was given by the Philadelphia Orchestra conducted by Alexander Hilsberg. The concert, on October 19, 1946, was part of the Worcester (Massachusetts) Festival and featured the orchestra’s tubist, Philip A. Donatelli, as soloist. Tubby the Tuba became the first major piece for tuba solo with orchestra, predating Ralph Vaughan Williams’ Tuba Concerto by 10 years. 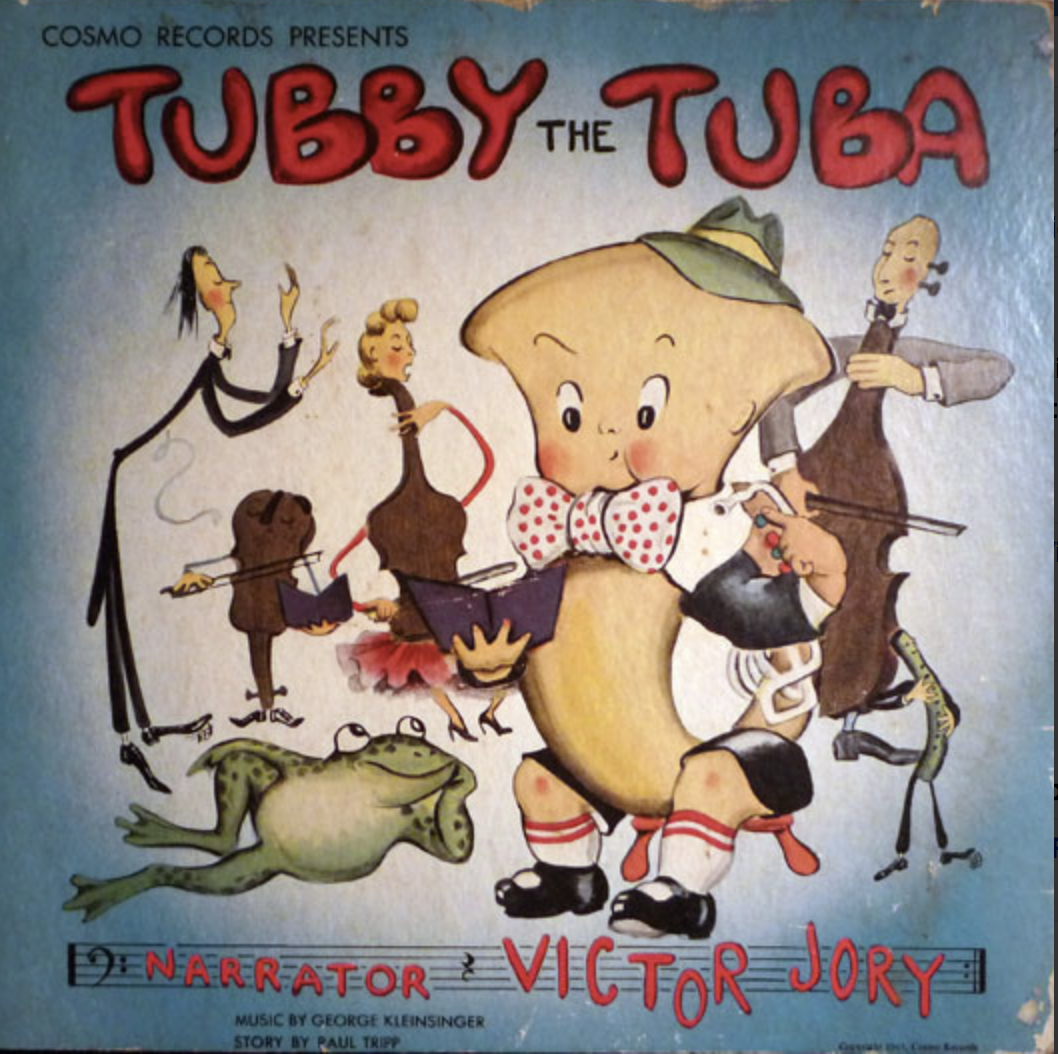 Tubby was first recorded in 1945 (The recording, on Cosmo Records, was released in December of that year) with Herbert Jenkel, tuba. This recording, with an orchestra conducted by Leo Barzin and Victor Jory narrating, may be heard HERE. Unfortunately, Jenkel was not credited on the album. 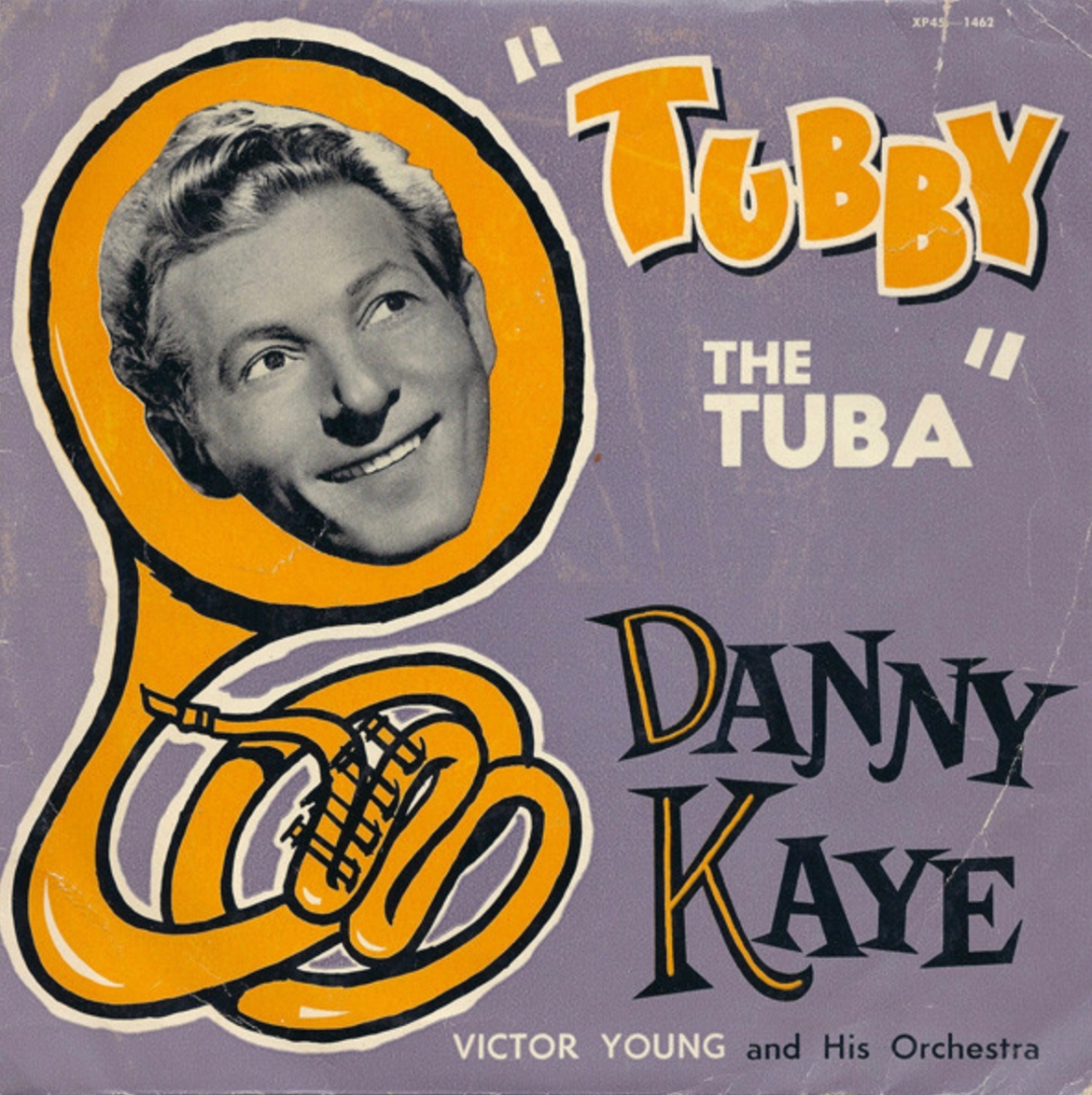 Tubby was then recorded in 1946 by Victor Young and his Concert Orchestra; Danny Kaye was the narrator with an uncredited tuba soloist. That recording may be heard HERE.

That same year, 1946, Tubby the Tuba made it to the big screen, as an animated short. It’s a charming film which received an Oscar nomination for best animated short. The film, a stop-action creation of George Pal and released as one of his Puppetoons productions, is absolutely delightful; unfortunately the tuba soloist is uncredited. If you cannot view the video embedded in this article, you can view it on YouTube by clicking HERE.

In 1963, Disney released another recording of Tubby the Tuba, with Annette Funicello (she of Mickey Mouse Musketeer fame) narrating with, yet again, an uncredited tuba soloist. That recording may be heard HERE. 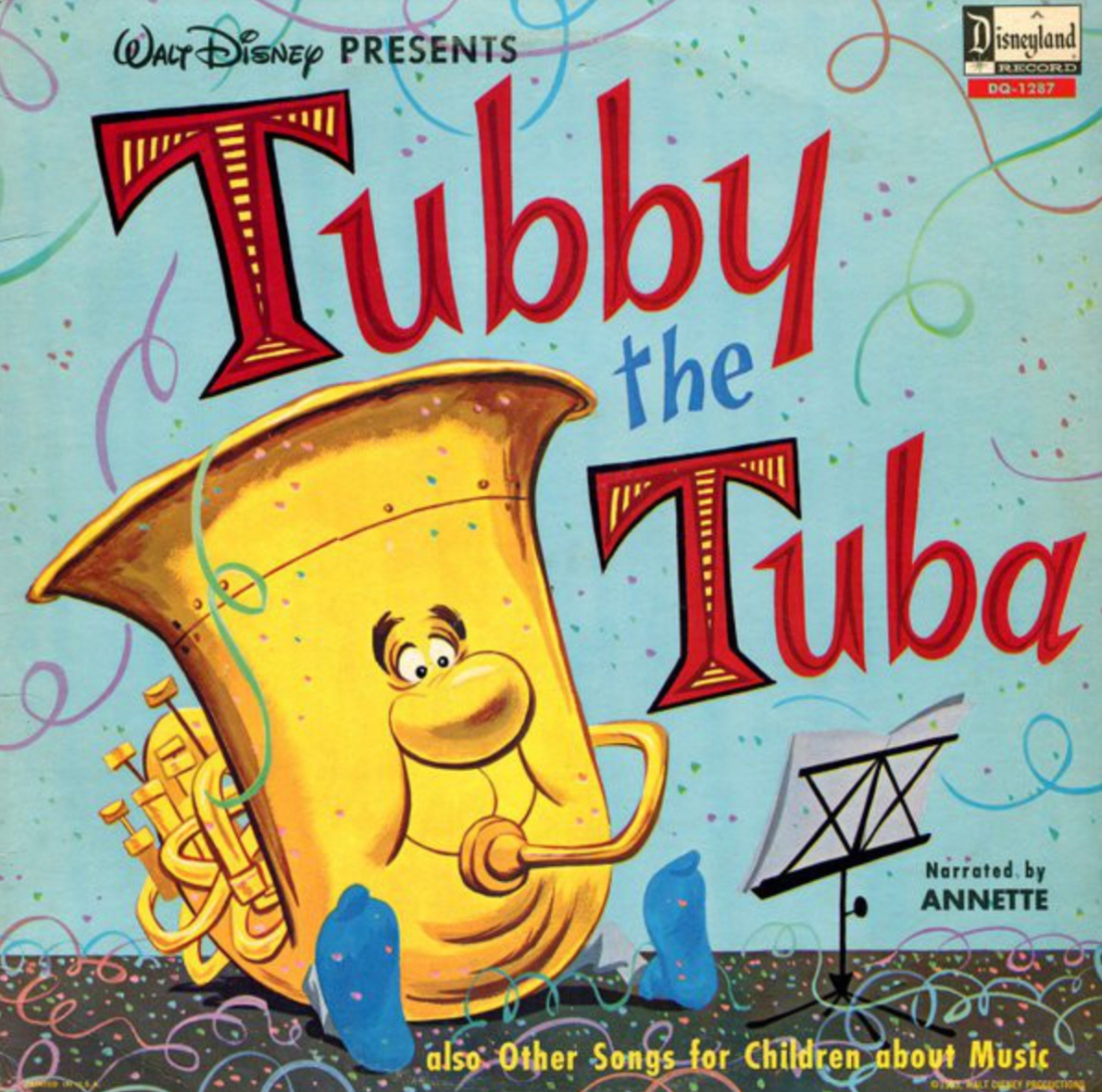 Tubby the Tuba found its way to the big screen again in 1975 (not 1977, as the video below indicates), as a full length motion picture starring Dick van Dyke as the voice of Tubby. It was a commercial failure; turning a ten minute piece into a  one hour, twenty minute film simply resulted in a bloated production that lost a lot of its original charm. Here is the familiar refrain: the tuba soloist is uncredited. If you cannot view the video embedded in this article, you may view it on YouTube by clicking HERE. 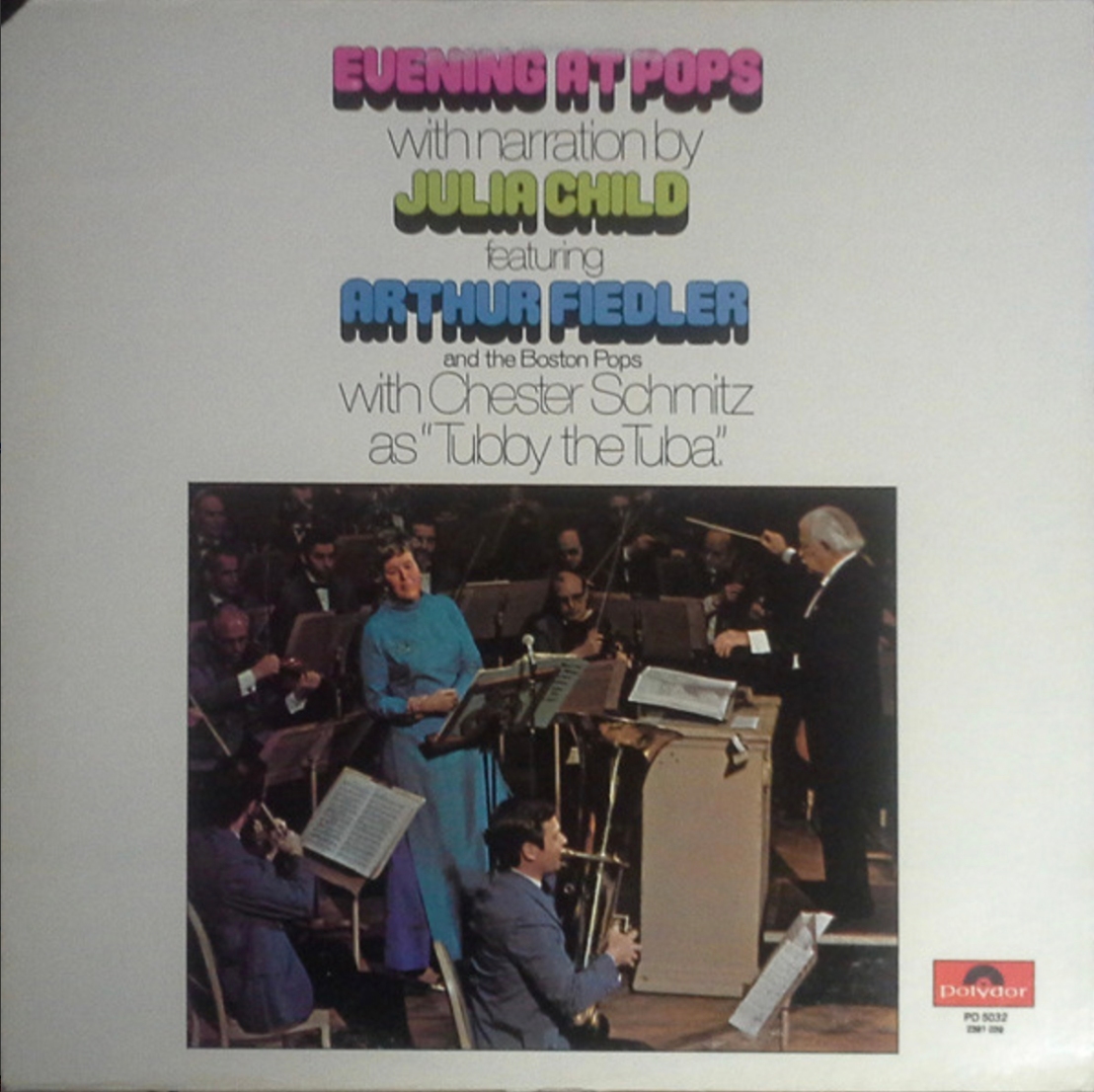 But of all of the versions of Tubby the Tuba, my favorite dates from 1971. Julia Child recorded the piece with the Boston Pops Orchestra conducted by Arthur Fiedler. Not only was this performance issued on LP, but it was recorded live for television broadcast on the PBS show, “Evening at Pops.” The tuba soloist was my Boston Symphony tuba colleague, Chester Schmitz (Chester played in the Boston Symphony from 1966-2001; we sat next to each other from 1985-2001). I have sung Chester’s praises many times before but I never tire of singing them again: he was, to my mind, the finest player of ANY wind instrument that I have ever heard. Chester had a remarkably natural ease to his playing, and his performance of Tubby, recorded in his fifth year with the Boston Symphony Orchestra is absolutely superb. His playing, combined with Julia Child’s wit, make this a performance for the ages. If you cannot view the video embedded in this article, you can see it on YouTube by clicking HERE. Enjoy!

For more information about Tubby the Tuba, read Cary O’Dell’s fine essay that was created for the Library of Congress when Tubby the Tuba was added to the National Registry in 2006. Tubby the Tuba: a delightful, unpretentious little piece with a very big history.