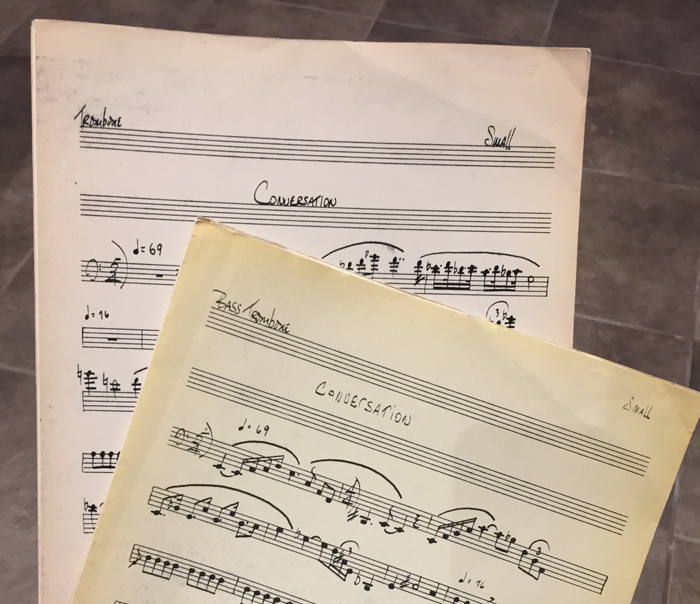 I know I’m not the only person who thinks that Conversation by Charles Small is the finest duet ever written for tenor and bass trombone. I’ve played this piece dozens of times with dozens of tenor trombonists over the year, beginning with the first time I played it in a recital at Peabody Conservatory of Music in Baltimore with my then Baltimore Symphony trombone colleague, Jim Olin in 1983. I recorded Conversation in 1996 with my Boston Symphony colleague, Ronald Barron and that recording was released on my CD, Proclamation, and Ron’s CD, In the Family. This past spring, I played it at Arizona State University on a doctoral recital given by my one of my students, Tim Hutchens. In fact, I will be playing it again this Friday, November 4, with jazz trombonist Jim Pugh at a masterclass I’m giving at University of Illinois School of Music at 2:30 PM in the University of Illinois School of Music Auditorium (the class is free and open to the public). Charlie wrote the duet for himself and bass trombonist David Taylor and has become a regular feature on student and professional trombone recitals for many years.

I have always played Conversation off set of parts that were done from Charlie Small’s original manuscript by a copyist (shown at the top of this article). But that version was not widely available, and in 1993, Conversation was published by Kagarice Brass Editions. The duet saw several printings by KBE but each had particular problems – things that were missing or not clear. Kagarice Brass Editions is now part of Ensemble Publications, and I asked the owner of Ensemble Publications, my friend Chuck DePaolo, if he would be interested in making a new printing of Conversation with Charlie Small’s approval. Chuck thought it would be great to to this so a few days ago, I called up Charlie Small – he lives here in Arizona, not far from where my wife and I live – and yesterday, we spent a several hours going over Conversation with a fine toothed comb.

It should be said that spending time with Charlie Small is a rare and truly wonderful thing. A member of the Tommy Dorsey Orchestra in the 1940s when he was a teenager, Charlie has been a major influence on the trombone scene for many decades. Conversation is only one of his many compositions and it was great not only to sit down and talk about his piece, but hear Charlie tell some great stories as well. We went through Conversation measure by measure. After several hours of working together, Charlie felt confident that we had identified all of the things that needed to be changed/fixed in this new edition. It’s now been sent off to the publisher and very shortly, a version of Conversation that reflects the composer’s intentions will soon be available. At last!