My wife and I attend Camelback Bible Church in Paradise Valley, Arizona. One of the ways we serve our church is to sing in the choir, a superb group led by our Pastor of Worship and Music, Dr. Luke Lusted. It is such a blessing and privilege to serve in the choir with our  group of committed, talented members who love God. Our spring concert is on this coming Sunday, May 21, at 3:00 PM. The centerpiece of the program is John Rutter’s Requiem for choir, soloist and chamber orchestra, and the whole program is centered around the theme of “And I saw a new heaven,” taken from the Bible’s book of Revelation, Chapter 21, and Edgar Bainton’s classic anthem with that title.

Luke asked if I would be willing to write program notes for the concert to be included in the concert program and I was more than happy to do so. With his permission, my notes on the program appear below. If you are in the Phoenix area on Sunday, you are heartily invited to the concert. Directions to Camelback Bible Church may be found here on the church’s website. The concert is free and I hope to see you there. Even if you can’t attend the concert, I pray that my program notes provide food for thought, meditation, challenge and encouragement.

Notes on the program

The three central events of the Christian faith are the incarnation of Jesus Christ, his death and resurrection, and his promise to return. The first two are securely in the historical and Biblical record, but the third remains what Titus called, “our blessed hope, the appearing of the glory of our great God and Savior Jesus Christ.” (Titus 2:13, ESV). The expectation of life after death for those called to Christ is central to Jesus’ teaching:

And so it is that the music performed at this concert reflects the great comfort of God’s promise to his children, and the encouragement that he gives us as we wait for that day and contend for Christ in a fallen, hurting world. Heaven is not “pie in the sky, bye and bye,” but rather something tangible and within sight. There is more to life than our time here on earth, “three score and ten [70 years]; and if by reason of strength they be fourscore years [80 years]” (Psalm 90:10, KJV), and composers have often turned to scripture to present the great Truth of suffering on earth paired with the comfort of life after death. 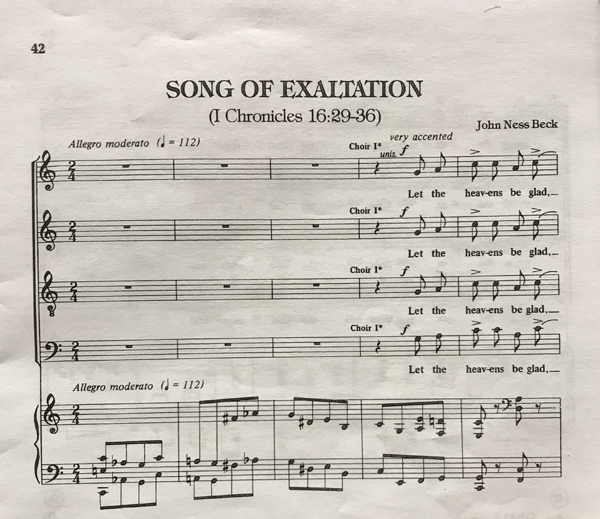 Song of Exaltation by American composer John Ness Beck (1930-1987) takes its exuberant text from the book of I Chronicles 16:29-36, a joyful hymn of praise to God in gratitude for his sovereignty over the heavens, earth, and the sea. Talk of the life in the world to come starts now–today–by praising God for his mighty works as all creation shouts, “God reigneth!” Beck’s tribute to George Frideric Handel’s “Hallelujah Chorus” from Messiah is unmistakable, when he concludes Song of Exaltation with, “Blessed be the Lord God of Israel for ever, and ever, and ever, and ever.”

The Bible’s final chapters, Revelation 21 and 22, are full of images of the holy city, the New Jerusalem, which is made ready in the new heaven and new earth. The challenges of this present life lead all Christians to yearn for that day, and the New Testament’s penultimate verse concludes with Christ’s promise, “Surely I am coming soon,” to which his children reply, emphatically, “Even so, come, Lord Jesus” (Revelation 22:20). Paul O. Manz (1919-2009) composed his most famous choral composition, E’en So, Lord Jesus, Quickly Come in 1954; it has become popular through its frequent use at the annual Christmas Eve Festival of Lessons and Carols at King’s College in Cambridge, England. Manz’s setting of the text is for unaccompanied choir, and it beautifully reflects the anticipation of a time when “night shall be no more . . . for Christ will be their All!”

In the wake of the Second Great Awakening, a wave of Christian revivalism that swept across America in the late eighteenth and early nineteenth centuries, William Walker (1809-1875) published a collection of “Tunes, Hymns, Odes and Anthems” in 1835 that he titled The Southern Harmony and Musical Companion. It featured well-known hymns and folk melodies, and among them were texts and tunes that Walker both composed and collected. By the 1845 edition, the exuberant song, Saints Bound for Heaven, with a tune by Walker and text by J. King, had been included. Its seven verses–four are included in the arrangement by Mack Wilberg that is sung today–speak of the longing for the breaking of the bondage of the suffering of this life and the crossing “over Jordan” to “the vaults of heaven.” 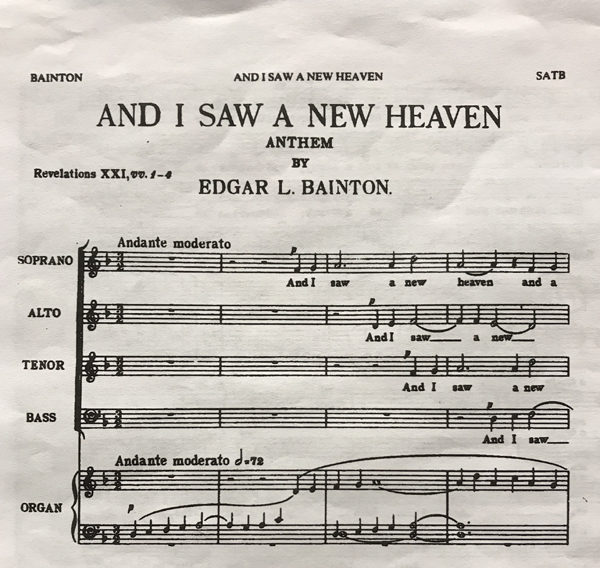 The theme of this program is taken from the famous choir anthem by London-born Edgar L. Bainton (1880-1956), And I Saw a New Heaven. Its text is taken from the opening verses of Revelation, Chapter 21, where John speaks of his awe at seeing the new heaven and new earth. The imagery of Revelation is exceptionally rich: the sea, that had been home to the Beast of Revelation (Revelation 13:1), is no more; there is no more death, no more pain, “for the old things are passed away.” Apart from the words of Jesus that are spoken from his throne, his words that proclaim, “Behold,” in the holy city, the new Jerusalem, “The tabernacle of God is with men,” Bainton’s setting of this memorable text is warm and contemplative. Written in 1928, And I Saw a New Heaven has achieved status as one of the most beloved and frequently performed of all choral anthems, both in England and the United States.

The earliest surviving musical settings for the church’s ancient mass for the dead, the Requiem–this Latin word means, literally, “rest”–date from around the tenth century. At that time, the text was sung in what is popularly referred to as Gregorian chant, a single, unison vocal line. Over time, composers have treated its many movements–with its traditional words of judgment, comfort and hope–in dramatic fashion as the Requiem has moved from being a piece performed at funerals to a work for the concert hall. Nineteenth century composers Hector Berlioz and Giuseppe Verdi scored their Requiems for huge forces. Berlioz called for a chorus of at least 200 and an orchestra with four brass bands with 38 trumpet, trombone, and tuba players. He famously complained that Wolfgang Mozart’s use of one trombone in the Tuba mirum movement of his Requiem (The dreadful trumpet of the Lord) was woefully inadequate when “not three, not thirty, not three hundred would be enough.” Johannes Brahms was one of the first composers to take a very different approach, fashioning his Ein Deutsches Requiem (A German Requiem) from selected passages in the New Testament to comfort the living rather than to honor the dead. Benjamin Britten came from yet another direction in his War Requiem, a work that argued against the horror of World War II by combining some of the Requiem’s original Latin text with poems in English by British soldier Wilfred Owen who was killed in battle a week before the end of World War I.

John Rutter (born in London in 1945) has added his own take on the Requiem’s storied history. Rather than a complete setting of the full, ancient Requiem text, his 1985 Requiem includes selected movements from the Latin Requiem along with passages from the Bible and the Book of Common Prayer in English as, “a meditation of themes of life and death.” While those who have died in Christ leave this earth for their heavenly home, it is left for those who are still living to suffer until they are themselves called to their eternal rest.

Three movements, Requiem æternam (Grant them eternal rest), Pie Jesu (Blessed Jesu) and Sanctus (Holy, Holy, Holy) are sung in Latin (you may follow the English translations in your program), Psalms 130 (Out of the deep) and 23 (The Lord is my shepherd) are in English, and two movements, Agnus Dei (Lamb of God) and Lux æterna (Eternal light) combine both Latin and English texts. The result is an integrated work that is intended for concert performance rather than as part of a church service. The mix of languages and varied texts as well as the Requiem’s arch–the opening and closing movements contain some of the same text, with the Sanctus, the great hymn to the Trinity, standing in the middle–very much speaks to our time.

Psalm 116:15 reminds us that, “Precious in the sight of the Lord is the death of his saints.” (ESV). Throughout this afternoon’s concert, that theme has been present. Life here on earth is but a blink of time in God’s economy. We trust in his promise of the new heaven and new earth even as we work today to do his will in this imperfect world and, by doing so, share in the sufferings of Christ (1 Peter 4:13). That is both the blessing for and blessed hope of those who know Christ. E’en so, Lord Jesus, quickly come.