Several months ago, my friend, Ronald Barron, with whom I shared 22 years as a member of the trombone section of the Boston Symphony Orchestra, posed a question to me:

What is “American Style” in music?

Ron had been thinking about this himself and gave a presentation on the subject at the International Trombone Festival in Valencia, Spain, in 2015. Since then, I’ve continued to think about his question, and the answer that I gave to Ron at that time.

Earlier this week, I was in the radio studios of Central Sound at Arizona PBS, where I regularly go to be the voice of the radio program, Arizona Encore! that is broadcast locally on KBAQ (KBACH) 89.5 and can also be heard anywhere in the world on the KBAQ website at 7:00 pm on Tuesdays and on demand with the Central Sound at Arizona PBS mobile app. In addition to voicing programs, I also write scripts for Arizona Encore! and another program that Central Sound produces, ASU in Concert.

While writing a script for an Arizona Encore! show that included Antonin Dvořák’s “American” String Quartet, Op. 12 in F major, Op. 96, Ron’s question came to mind again. I pulled out the comments I wrote when he first posed the question and thought that this would be a good time to turn them into a short article to provoke thought and discussion. I think anyone who lives in the United States would answer this question in their own way. But here’s what I think.

What is “American Style” in Music?

The native people who settled and lived in what we call the United States of America have virtually no voice in today’s broad American cultural conversation. This is highly regrettable, because any discussion of an American Style – whether in music, painting, literature or any of those disciplines that we call “the arts” – has been influenced by them. When talking about American Style – and for the sake of this discussion, I am confining my comments to American Style in music – we must remember that their contributions were fundamental in shaping the great “melting pot” (to use the over-used word) of influences that came to shores to settle in the United States. 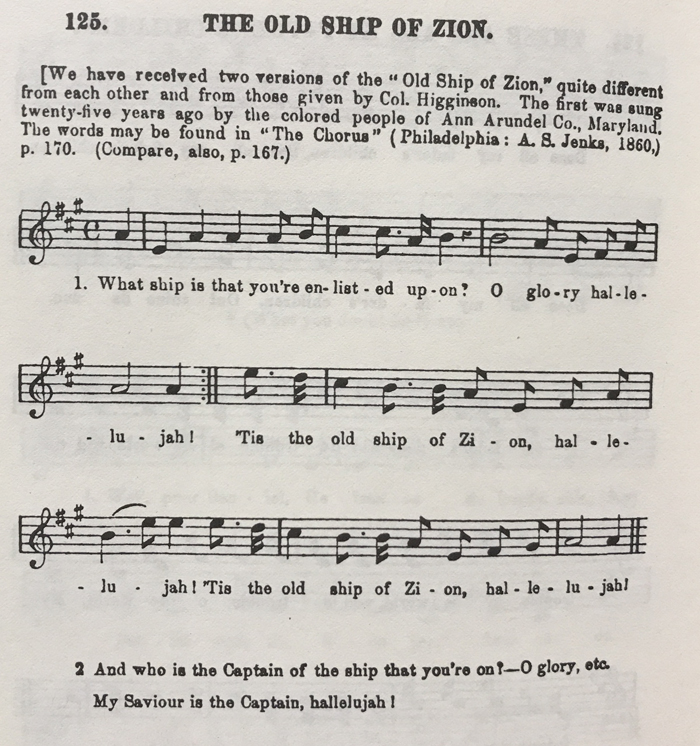 The African American spiritual, “The Old Ship of Zion,” as published in Slave Songs of the United States, published in New York by A. Simpson & Co. in 1867.

The Puritans (from Boston, England, by way of the Netherlands and Plymouth, England), Roman Catholics (from Spain and Portugal), and traders (from the Netherlands and France) who were among the first European explorers of America brought their religious influences to what we today call the mid-Atlantic and New England states. English Psalm tunes and Italian-influenced Spanish plainchant was heard mixed with the folk music of the motherlands and rhythms and chants of America’s native people. In time, the new colonies – occupied by England, Holland and Spain and, to some extent, France – developed their own form of folk song born out of a newly found freedom of expression. America was a vast place even before its West was discovered anew by Europeans, and the rural, agrarian life brought with it a sense of space, and distance from forces that dictated “proper” style. This mélange of ethnic groups was broadened even more with the introduction of the horrific slave trade. Denominational and non-conformist/free church musical traditions from Europe were influenced by African and West Indian rhythmical expressions, and rather than exploding into the musical equivalent of the destruction of the Tower of Babel, they coalesced around a word that I believe most defines the American musical style:

Whether the music of spirituals, folk music of Appalachia, shaped note music of the South, honky-tonk and saloon music of the West, cakewalk and ragtime of Louisiana, hymnody of the Mormon trail, gospel songs of white churches or what became jazz, it all had one theme: despite its considerable challenges and many problems, America was a good place to live, it was good to be here, and there was more good ahead.

So while the classical and popular music of young, immigrant America was influenced both by the people who had roamed the land for centuries and those who had just arrived, the American sense of optimism – of “can do,” of the foray into the great unknown, of the pioneer spirit, of a gold rush that could (but would not but to a few) make any man rich, of “Happy Days are Here Again,” of the race to the moon – imprinted this place with a musical expression that was positive and looking forward. Even a great composer like Antonin Dvořák, who came to New York in 1892 and wrote music that was infused with an intangible, bright and optimistic quality, realized that he could not have written his “New World” Symphony or “American” String Quartet, in his own words, “‘just so’ if I hadn’t seen America.”

Of course, by the end of the long nineteenth century – roughly the time from 1776 (the writing of the American Declaration of Independence and all that it brought to the colonial powers who had conquered the land) to 1918 (the end of the First World War, the “war to end all wars” which, of course, it was not), the optimism began to ebb. Post-war ebullience was tempered by the loss of more than of a generation of young men from England, France, and Germany, and many from the United States. The Native people who had once roamed the land had been rounded up and confined to reservations. The promise of true emancipation for the descendants of slaves gave way to Jim Crow. The economic boom of the 1920s paved the way to the Great Depression of the 1930s. A second World War consumed western civilization for nearly another decade, and all of the good intentions of the League of Nations and United Nations could not tame the greedy and selfish appetites of forces that were political, national and religious, whether the Ku Klux Klan, communism or radical Islamic-facism. The optimism gave way to cynicism, to forms of rebellion. The work of the second Viennese School – with its abandonment of 18th century tonal harmony that led music to more and more reflect the chaos and ugliness of the times – even found its way into popular music. American composers like Aaron Copland, who in the middle of the 20th century seemed very much to define the American Style’s sense of space and optimism, traveled the road of the European serialists, not wanting to be out of step with the relentless rush of modernity, seeing if they could find a new voice that was both relevant and honest. Some succeeded better than others, yet there always seemed to be a pull back to the center of the American thought ethos, a desire not to be wholly desperate but rather hopeful even in the midst of what Paul Hindemith called, “confusion, rush and noise” (The Posthorn).

For the trombone, the staid harmonies of Moravian chorales – by which the trombone was introduced to American shores – gave way to ragtime and jazz. The world found Arthur Pryor’s eye-popping trombone virtuosity to be nothing short of stunning, while Henry Fillmore’s toe-tapping “Trombone Family” of trombone smears – with their roots in minstrelsy and blackface – were found on band programs around the country. As jazz found its legs and kept growing out of the clothes of its African, West Indian, and European roots, styles like be-bop brought the joyful exuberance of Frank Rosolino and J.J. Johnson, whose creative and enthusiastic music and music making belied the dark demons that ultimately led them to point a barrel of a gun at their heads. And pull the trigger. For every trombone concerto by someone like Christopher Rouse – dark, brooding, introspective, even hopeless – there were two or three by composers like Eric Ewazen, who forsook his long exploration down the tunnel of serialism only to come out wholly embracing 18th century tonality and a new Romanticism with a renewed sense of joie de vivre, with a relentlessly syncopated, rhythmic drive, and expansive melodies that seemed to point one to the high peaks and majestic canyons of the great American west.

As an American who celebrates his 62nd year of life and 53rd year of playing the trombone in 2017, I find myself more and more attracted to – Hindemith, again – “the lasting, calm and meaningful.” Having grown up and worked in the great population centers of the East and Midwest – childhood in New York City, college in Chicago, more college in New York City, and orchestral careers in Baltimore and Boston – I have returned to the west. Having been born in California in the final days of my father’s service in the U.S. Army during the Korean Conflict – a still unresolved war that became emblematic of the conflicts of the second half of the 20th century and beyond – I now live in Arizona, where the natural beauty and sense of space has affected my artistic temperament in significant ways. From my front porch where at night it is so dark I can see the Milky Way with my naked eye – in the foothills of the Estrella Mountains (that is their Spanish name; the Native Americans who were here long before them called them Komatk Doag), with silhouettes of saguaro cacti on the horizon in every direction – I very much feel like the 19th century American explorers Lewis and Clark and their Corps of Discovery. Like them, I no longer know what to expect around every turn as I did while in my comfort zone in the East. Now, my artistic personality is informed by influences overlooked, forgotten, abandoned and tamped down in the mad rush to settle the continent – the voices of the Native peoples. Their pottery and basketry informs the artistic ethos of our home. I’ve recently been involved in a major research project on Russell “Big Chief” Moore, a member of the Akimel O’odham tribe who in 1912 – the year Arizona became the 48th state in the Union – was born just over the mountains from my home, and went on to be one of America’s great jazz trombonists. A bison skull, a reminder of what the clash of old and new societies nearly brought to extinction, overlooks our patio. Two racks of shed elk antlers on display in my living room and music studio remind me that contrary to the dominant thought that I found so easy to embrace in the fast-paced East, I am not the biggest and strongest thing around. Most of all, though, I am in a place where quiet is easy to find, where I can, within minutes, be where I cannot see another indication of modernity as far as my eyes can see.

This, for me, is America: bold, beautiful, ever changing, positive, optimistic, peaceful. These American values are ever before me, and remind me that even though these noble aspirations are not always to be found  easily – there is much work to do in this imperfect, fallen world – the challenges faced in desiring them cannot keep me from pursuing them relentlessly. It is these qualities, in a season of life where I no longer need to play any music I do not wish to play, where I choose to put aside the music that tries to reflect the confusion of our present age in favor of music that celebrates the purity of what I wish it to be. I stand with James Reese Europe and his 369th Infantry Harlem Hellfighters Band, Russell Moore and his Pima people, with Aaron Copland and his vision of  Appalachian Spring, Eric Ewazen and his Pastorale, and even Dvořák, whose “American” string quartet, composed in Iowa, reflects his understanding that American Style had to reflect something of the history and greatness of the land, its people, and their struggle.
In this, I am an American musician who embraces what I believe is the greatest informer of American Style in music: Optimism.