Last week, a good friend of mine was singing Claudio Monteverdi’s Vespers of 1610, the Vespro Della Beata Vergine (Vespers of the Blessed Virgin). This is an extraordinary work, one that I have loved since I first heard it many decades ago. I was very fortunate to have an opportunity to play the Vespers in 2003 as a member of Boston’s Handel and Haydn Society. This was a unique performance that was semi-staged (statues of the Virgin Mary were plentiful at those performances) at the Colonial Theatre in Boston’s theater district. The photo below shows the winds of that performance (clockwise from bottom left): Michael Collver , Paul Perfetti and Kiri Tollaksen (cornettos) and myself, John Faieta and Robert Couture (sackbuts). 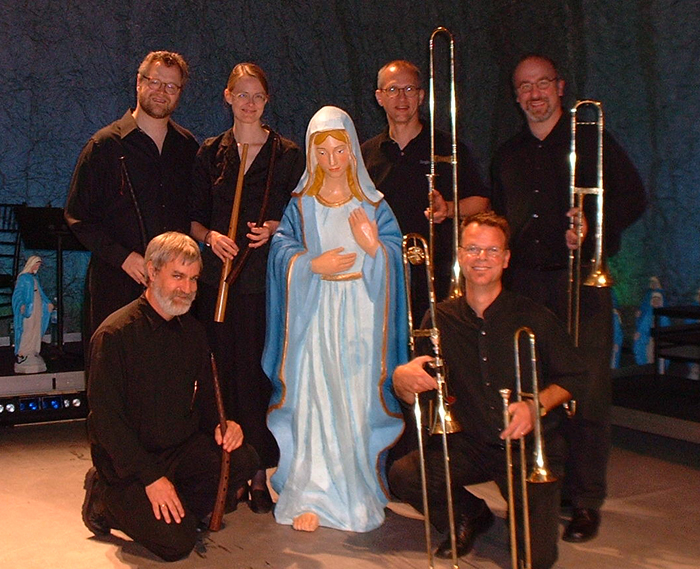 All of this thinking about Monteverdi has had me listening to a lot of his music in the last few weeks, and I turned in particular to my favorite recording of the Vespers, that by Boston Baroque conducted by Martin Pearlman. Here’s a short video with highlights from a Boston Baroque performance of the Vespers from 2014. If you can’t view the imbedded video below, click HERE to view the video on the Vimeo website.

Most people, if they know Monteverdi’s music at all, know the Vespers. But he wrote so much more.

One of my favorite Monteverdi pieces, one I never tire of listening to, is his aria, Si dolce è il tormento. It is a haunting, plaintive melody of an irregular length that is sung over an interesting, even curious bass line. It has been sung by many of the world’s finest singers. Scored for singer with continuo – it has been performed with a host of accompaniments –  it seems most effective, to me, when the accompaniment is simple rather than complex. Here is a performance by Anne Sophie von Otter. If you can’t view the imbedded video below, click HERE to view the video on the YouTube website.

Von Otter is one of my favorite singers, and she had a lead part in one of the most memorable concerts I played when I was a member of the Boston Symphony Orchestra,  conducted by James Levine. These were performances of Les Troyens by Hector Berlioz where von Otter had the role of Dido, the Queen of Carthage. It was electrifying, stunning, unforgettable. The Boston Globe‘s review is glowing but words cannot really express that beauty and power of those performances.

But I take nothing away from Sophie von Otter when I say I have particular affection for a performance of Si dolce è il tormento that my good friend, Michel Godard, organized. Michel is an exceptional player of the serpent, an instrument I’ve been playing since 1993. He is also a man of unusual and special creative abilities, and he has recorded many albums of music that features his playing serpent. These albums are classical, jazz and what Gunther Schuller referred to as “third-stream,” a synthesis of classical music and jazz. His CD, Monteverdi: A Trace of Grace, includes a remarkable performance of Si dolce è il tormento. Guillemette Laurens has a deep, rich voice with a unique timbre, and the combination of theorbo, violin, serpent and electric bass accompaniment is beautiful to behold. I am not such a purist (read: snob) that I cannot enjoy creative treatments of classic works. Treated with respect, love and care, great music can live in many forms. Michel and his collaborators bring all of that and more to this beautiful performance.

Fortunately, Michel’s recording session was captured on video and you can enjoy it below. If you can’t view the imbedded video below, click HERE to view the video on the Vimeo website.

Monteverdi. A Trace of Grace, indeed.

[The photo at the top of this post shows my serpent d’église by Baudouin (Paris, c. 1812). The photo was taken in my room at Kloster Michaelstein, Germany, when I was there presenting a paper and giving a concert at the symposium, Der Zink: Geschichte, Instrumente und Bauweise, in 2009.]