I’ve been fascinated with musical instruments for as long as I can remember. One of my earliest childhood memories is of going to the Metropolitan Museum of Art in New York City and standing in front of a display case that displayed three dragon bell trombones. These instruments, made in Belgium and France in the early nineteenth century, went by the name buccin, and I still have the postcard I bought on that afternoon, shown below. It is the oldest artifact that I have from my childhood and I wrote an article about the buccin on The Last Trombone. You can read it by clicking HERE.

My fascination with musical instruments continued and grew from that time long ago, and over the years, I learned to play many of them. I started with the trombone, then bass trombone, bass trumpet, contrabass trombone, serpent, bass sackbut, ophicleide, didgeridoo, conch shell, and many more. That exploration of musical instruments continues today and I’m pleased to announce the upcoming publication of my newest book, one which is devoted to many of the instruments that I and many others have come to love so much, An Illustrated Dictionary for the Modern Trombone, Tuba, and Euphonium Player.

In a sense, this new book is the culmination of a lifetime of interest in and exploration of low brass instruments. The publisher, Rowman & Littlefield, contacted me in 2016 and asked if I would be interested in writing a book on low brass instruments for their series of Dictionaries for the Modern Musician. At that time, there were dictionaries for conductors, clarinet, trumpet, and strings, and since then, the series has grown to include dictionaries for singers, piano, percussion, and flute. One for trombone, tuba, and euphonium was needed, and I was pleased to set about working to add a new volume to the series.

This was quite a project. I had the opportunity to create a dictionary with hundreds of entries about instruments I love and which have intersected with my life on a daily basis for decades. I could include anything I thought was important for players, teachers, conductors, and audiences to know about these instruments. What is that part called? Why was it invented? Where does it fit on the evolutionary chain of the instrument’s family? Who played it? Who wrote great pieces for it? Questions, questions, questions. So I set about looking for answers.

The process was an enlightening one. I started by making up an initial working list of entries: instruments, instrument makers, parts of instruments, composers, performers, teachers, musical compositions, and more. I then asked several friends who are professors of trombone, tuba, and euphonium at several colleges, universities, and conservatories of music to ask their students to make a list of 50 words they would like to see included in the book. The lists that they sent to me were fascinating. Of course there was some commonality between the lists, and they included many words that I had already decided should be a part of the book. But there were other words that I didn’t know. Why did someone think that term would be important?  I set about researching, and reading and reaching out to friends, colleagues, and scholars to get answers.

But before I got too far along in the process, I needed to make a big decision. The old phrase “a picture is worth a thousand words” is self-evidently true. The book needed illustrations to bring my text alive, and when I asked myself the question, “Who should make the illustrations?”, there was only one possible answer that came to my mind: Lennie Peterson. I’ve written previously about Lennie Peterson here on The Last Trombone and you can read that article by clicking HERE. He’s a remarkable artist and a close friend (and a superb trombonist), equally conversant as an illustrator, fine artist (oil and other media), and cartoonist. If you only know Lennie from one of his most famous cartoons from his comic strip, The Big Picture (not a week passes by without someone sending me this cartoon, “Have you seen this? It’s fantastic!” Yes, I’ve seen it, and I bought the original from Lennie many years ago and it hangs in my home office), then you don’t know the true scope of what he can do. 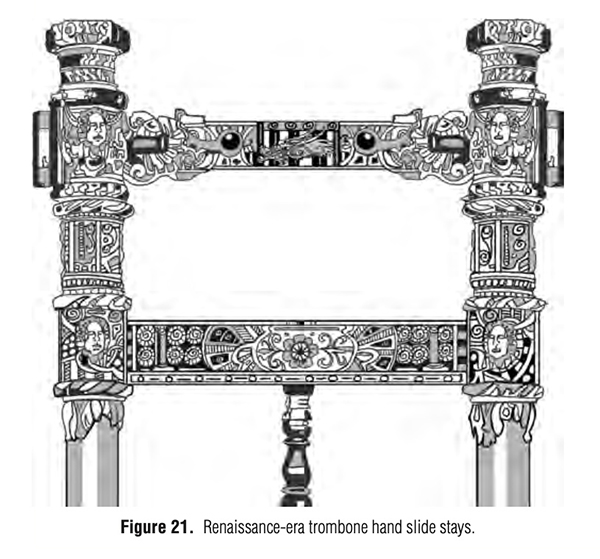 Sometimes Lennie took an existing work of art, such as a fresco of a Roman-era cornu in Pompeii (Don’t know what a cornu is? Look in the book!), and he gave it a personal touch: 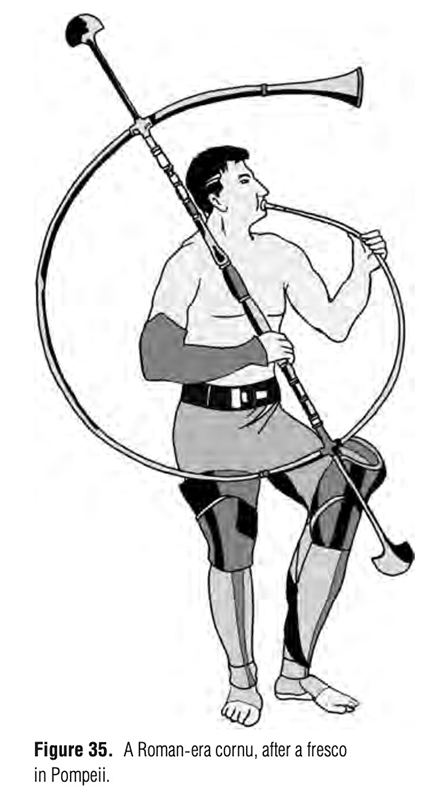 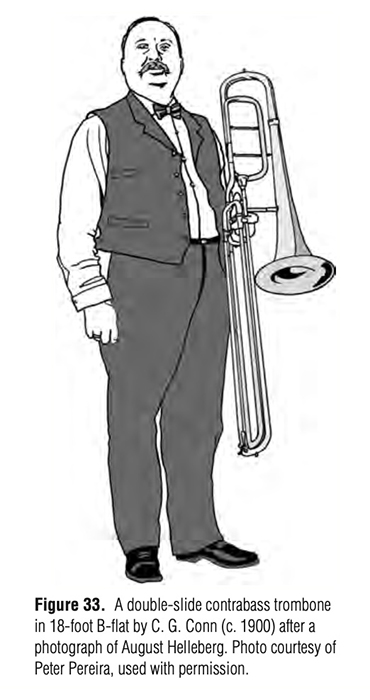 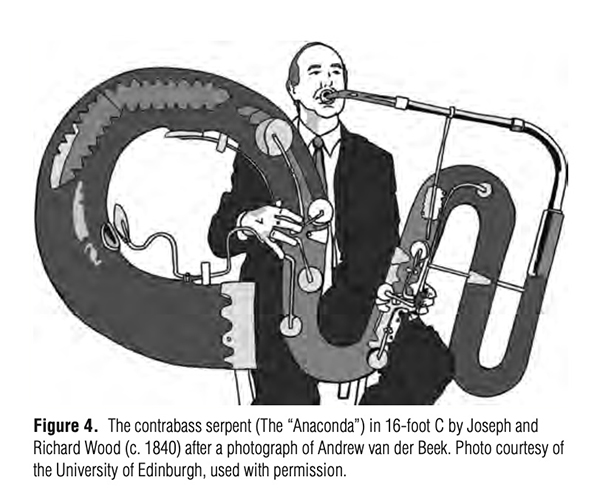 Lennie also based illustrations on photographs I took of instruments in my own and other collections, and his attention to detail allows the reader to follow the intricacies of instrument tubing and other details, such as his illustration of a six-valve trombone with seven independent tubes:

As I began writing, Lennie began illustrating, and when we were done, I had written 675 entries and Lennie had made 125 illustrations. Back and forth we went, with me refining words and Lennie refining lines and shadows.  When we were done, the book went out for peer review and at the end of that process, we were more than happy that the reviewers pronounced  that the book was both engaging and factually accurate. Several respected members of the low brass community added their endorsement to the book—see some of their words on the back cover below (the white rectangle on the back cover will be filled by the book’s ISBN number and bar code). A long period of editing, correcting, adding, copyediting, proofreading, and layout ensued, and recently, the book went to the printer. It will be available around November 1 but it can be ordered now. More on that below. 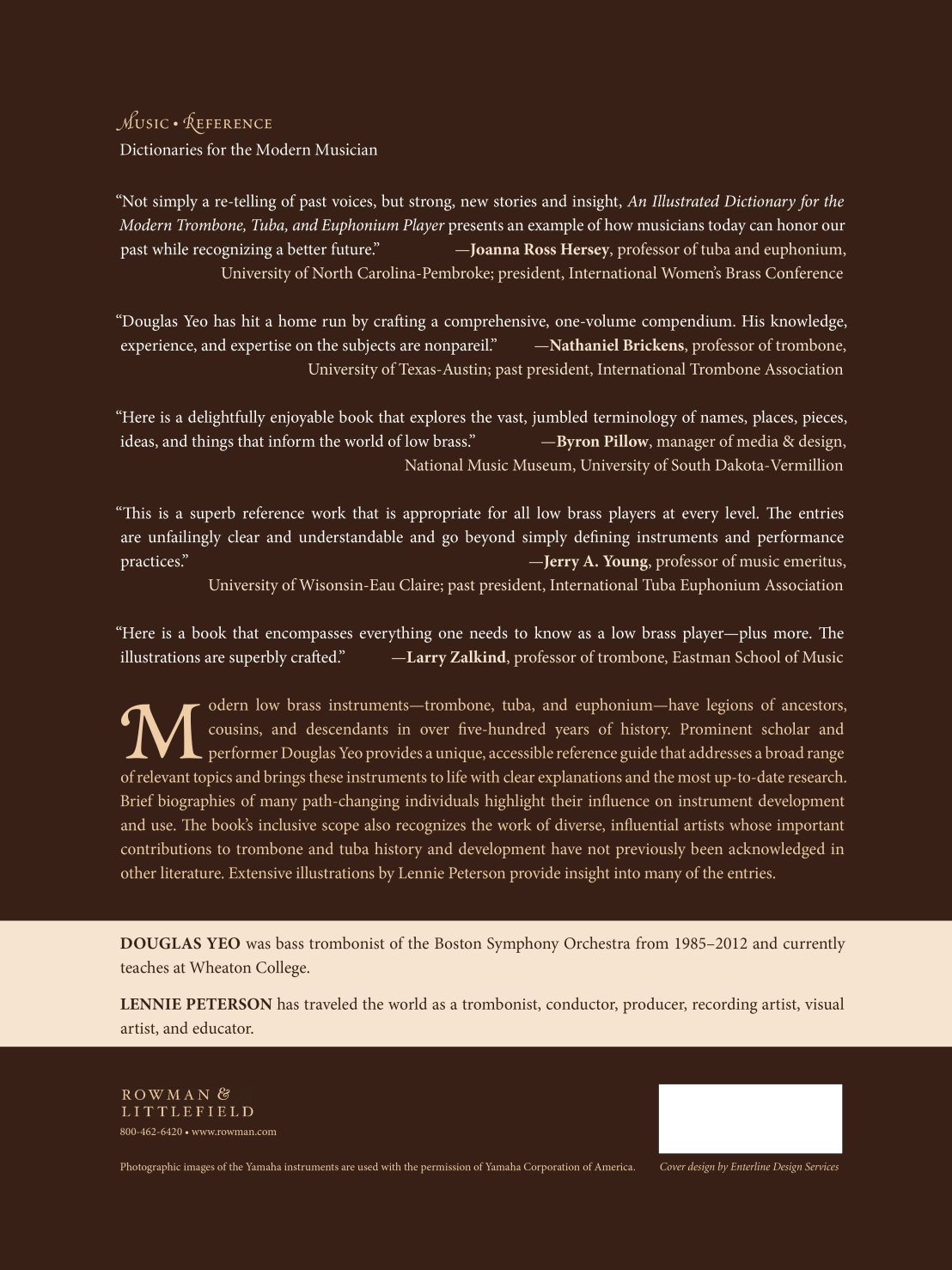 Readers will find entries about a host of subjects, from ærophor to Antoniophone, to articulation, back pressure, ball joint, baritone horn, bass horn, bass trombone, bass tuba, Bellophone, Hector Berlioz, Clifford Bevan, bombardon, Giulio Marco Bordogni, Brian Bowman, braze, breathing, Lillian Briggs, “Bydlo” tuba, carnyx, chops, cimbasso, circular breathing, compensating valve system, double-bell euphonium, well, you get the idea. The book is all about instruments, parts of instruments, “path changers” who changed the course of an instrument in some way, manufacturers, playing techniques, and much more. The book’s page on amazon.com has a few “look inside” pages so you can get a closer look at the book.

An important element of the book has been the effort to recognize voices that have not been widely or adequately recognized in other literature. Hence, readers will find entries on many women (and also an entry on the word “gender”) including Cora Youngblood Corson, Dorothy Ziegler, Betty Glover, Maisie Ringham-Wiggins, Constance Weldon, Melba Liston, Lillian Briggs, Abbie Conant, and others, as well as entries on many people of color (and also an entry the word “race” and one on “regional music”) including  James Reese Europe, Nathaniel Davis, Edward “Kid” Ory and Joseph “Tricky Sam” Nanton, Howard Johnson, John M. Kuhn, Russell Moore, Juan Tizol, and others.

If what you’ve read so far has piqued your interest, Rowman & Littlefield has a special offer for you. For a limited time, the publisher is offering a 30% discount on the book, in both the hard cover and ebook editions. Of course, if you want to pay full price, you can order the book on amazon.com. On the other hand, if you’d like to save 30%, you can order it on the book’s page on the Rowman & Littlefield website and enter this promo code:

(Note: This discount code has been corrected. If you tried to order the book with a different code, try again with this one. It works!)

It is my hope that An Illustrated Dictionary for the Modern Trombone, Tuba, and Euphonium Player will find its place on the bookshelves of libraries, and in the hands of teachers, players, composers, and lovers of these instruments as we, together, work to better understand the “what,” “when,” “where,” “how,” and “why” of the trombone, tuba, and euphonium and their ancestors and descendants. Please feel free to share and link this blog post with your friends, students, and others via email, reblogging, or social media.