In recent years, many performers and teachers have been working to encourage more diverse programming in recitals and concerts that would include more excellent works by underrepresented composers. In an effort to help my students and colleagues who would like to know more about such works, I have started a working list of pieces for tenor or bass trombone solo by composers who are members of diverse races and ethnic groups including but not limited to Asian, Black, Indigenous, and Latino/Latina. 80% of the world’s people are non-white—they are the global majority—and their music deserves to be heard.

The list is now available on my website and may be downloaded by clicking HERE. The direct URL is: http://www.yeodoug.com/Yeo_POC_PGM_Women_composer_trombone_solo_list.pdf At the moment, the list mostly features works by Black composer as well as two important resources by Dr. Natalie Mannix with detailed information about works by women composers. I will continually update the list to include works of many other composers and I welcome hearing about additional works that should be included. Readers can contact me at the email address that is found on my list. The most recent version of the list will always be available on my website at the URL above. 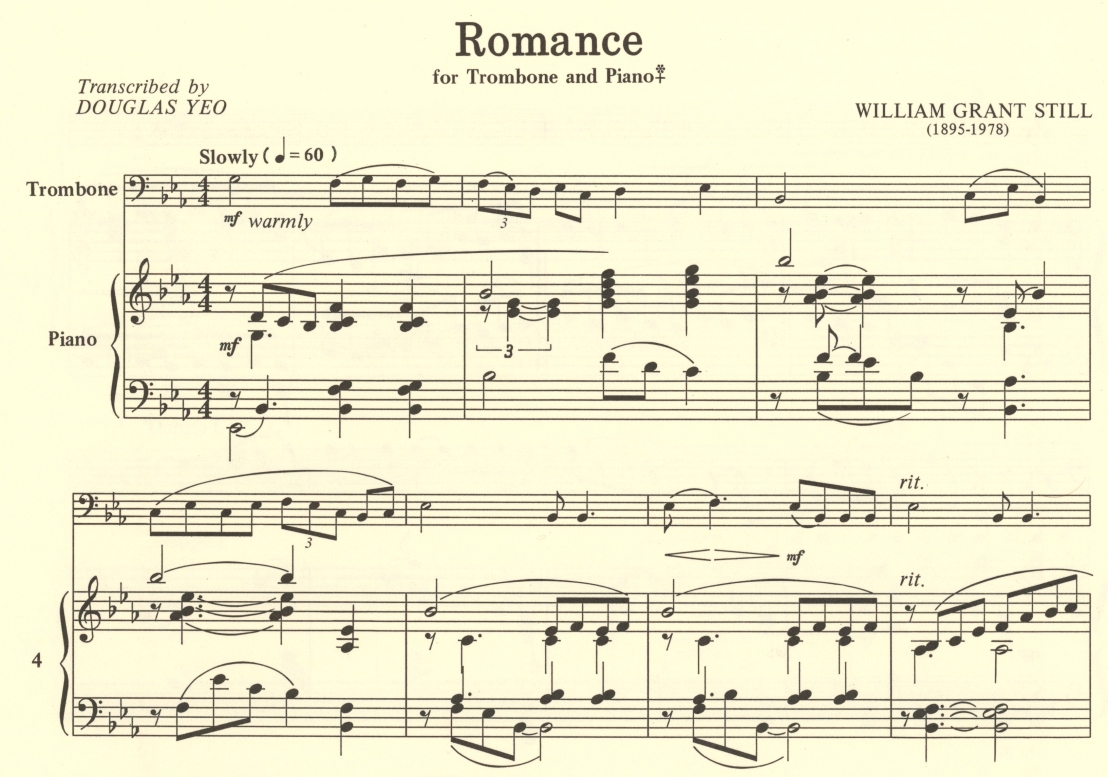 Among the works on the list is my transcription of William Grant Still’s Romance. Still (1895–1978) was a celebrated African American composer who wrote more than 200 works. In 1990, his daughter, Judith Anne Still, reached out to me and asked if I would be interested in transcribing her father’s Romance—which had been originally composed for alto saxophone in 1966—for trombone. Judith was interested in the piece becoming more widely known and I was very happy to make my transcription which was subsequently published by International Music Company. Romance is a solo with piano accompaniment but William Grant Still also arranged it with orchestra accompaniment which is available on rental from International Music Company. In May 1991, I performed Romance with the Boston Pops Orchestra conducted by John Williams. The performance, which came on the same concert where I played John Williams’ Tuba Concerto (played on bass trombone), was aired nationally on the radio and you can hear it by clicking HERE.

On April 23, 2022, I will be giving a faculty recital at Wheaton College, and my program will include two pieces that are found on my new list, Concertino by David F. Wilborn and Extremely Close by Daniela Candillari. I hope my list and other lists like it that others are preparing will be helpful as we work to know more about more great music, and have our recital and concert programming reflect compositions by a more diverse group of composers. It matters.