As the page is turned to a new year, from 2019 to 2020, we all do well to reflect upon and remember those who helped us in the past. Sometimes that reflection leads to action, and I hope this blog post might encourage others to follow in the steps of many others who are working today to help a person in need.

Most trombonists are aware of the pioneering work of Orla Edward Thayer, who, in 1977, invented the Thayer axial-flow valve. Ed’s invention was hugely influential in the trombone marketplace and it set off a rush of innovative design of valves by a host of manufacturers which resulted in significant improvements to trombones.

Ed’s valve was first patented in 1978 with a cylindrical valve design. In 1985, he was issued another patent with the well-known cone valve design that is still in use today. 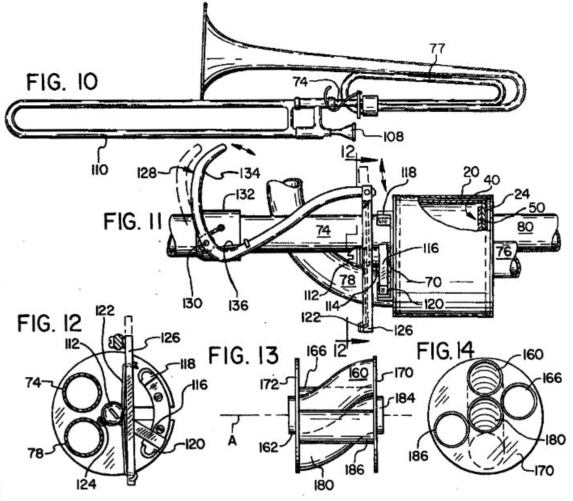 My colleagues in the Baltimore Symphony, Jim Olin (co-principal), Eric Carlson (second) and I all used axial-flow valve equipped trombones—we became one of the first trombone sections to use trombones with Ed’s valve. The photo above shows Jim, Eric, and me in March, 1985.

Ed Thayer was a superb inventor. More than that, he was a decent, honorable, kind person, and I and many others have always said the same about his wife, Barbara. I count it a privilege to have called them friends. Ed died in 2009, and while the valve he invented changed the face of trombone design, he was not the most savvy businessman. Several unfortunate circumstances surrounding the patent and production of the axial-flow valve drained Ed and Barbara of their financial resources and they were forced to live on Social Security alone. Barbara, now 94 years old, is living month to month.

Ken Novotny has established a gofundme page to help Barbara Thayer pay down her existing debt and help her with a long-term housing solution. This is an admirable project that has already generated many donations from generous donors. But there is a long way to go to the goal of $11,945.

As I was reading my Bible this morning, the following words jumped off the page:

Wash yourselves; make yourselves clean; remove the evil of your deeds from before my eyes; cease to do evil, learn to do good; seek justice, correct oppression; bring justice to the fatherless, plead the widow’s cause.

These words are from Isaiah 1:16-17. It was shortly after reading these words that I received an email from my friend, Marcel Schot, a trombonist in The Netherlands, letting me know about Barbara Thayer’s plight and this effort to help her. As a result, my wife and I have just made a donation to the Help Barbara Thayer gofundme page.

Would you consider doing the same? I don’t think there is any better way to start the new year than to help a widow. Barbara Thayer is deserving of our help, and doing so also honors the legacy of her late husband, Ed. Click the gofundme icon below to be directed to the “Help Barbara Thayer, Widow of Edward Thayer” page. Do a good thing, and “plead the widow’s cause.” Thank you for your consideration.