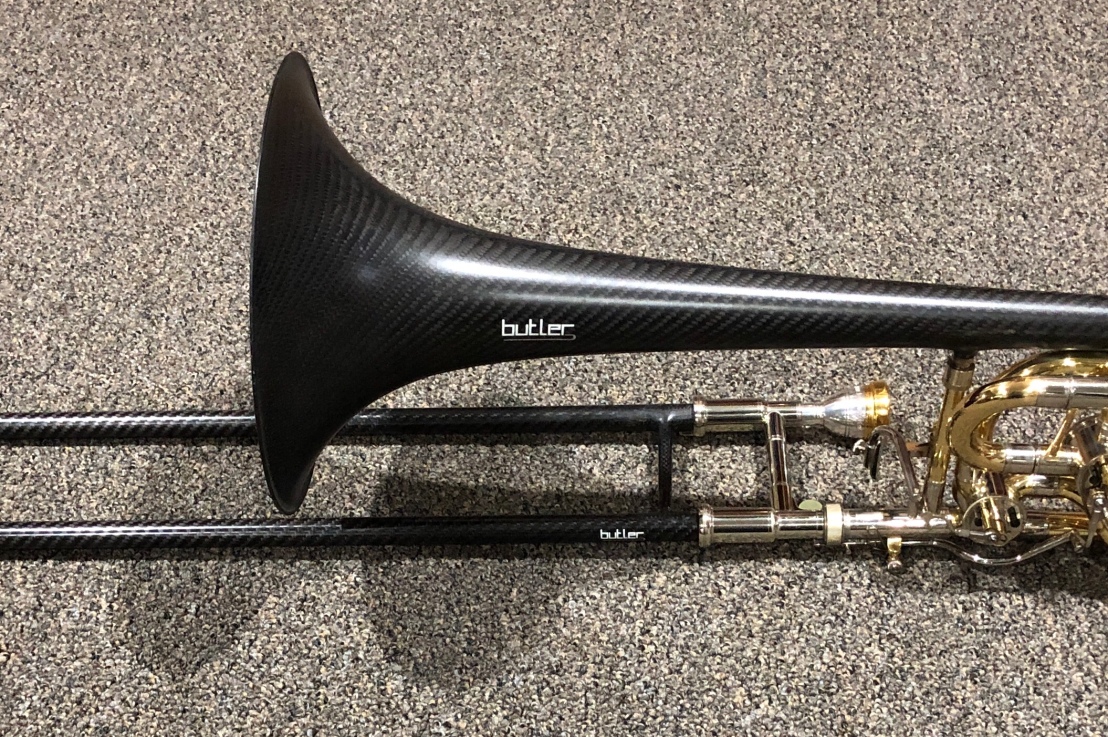 This is not a toy. I have many plastic trombones, pBones to be precise. I purchased them six years ago when I began teaching at Arizona State University and they made nice props in my office.

pBones come in red, yellow, and black (among other colors) and those colors were close enough to ASU’s maroon and gold. School spirit and all that. They are toys, fun to mess around with, fun to put in the hands of my two and four year old grandchildren. But they don’t have a great sound, are fragile, the slides are not very smooth, and they are mere stepping stones to a “real trombone.”

But yesterday, I received a package from Dave Butler at Butler Trombones in Dallas. This was a package that contained something I’ve been anticipating for nearly one-and-a-half years: my new carbon fiber bass trombone. This is not a toy. This is not a plastic trombone; it’s not a high-tech pBone. This is a major development in the evolution of the trombone and something that is changing how we think about trombone development and manufacturing.

How this remarkable instrument came to be in my hands today requires a bit of backstory. Here goes.

Since 1986, I have worked with YAMAHA – YAMAHA Corporation of Japan (YCJ) and YAMAHA Corporation of America (YCA) – on the development of the bass trombone I have played regularly since 1991, the YAMAHA Xeno YBL-822G (formerly the YBL-622). My relationship with YAMAHA has been one of the greatest professional relationships of my long career in music. This is a company that has been truly interested in making a superb bass trombone, an instrument that would work for me, that would be my “voice” on the trombone. I love this instrument. My YAMAHA bass trombone represents the highest level of research and development in a bass trombone, and I have played it dozens of genres of music over the years, including the last 22 years of my long career as bass trombonist of the Boston Symphony Orchestra. I cannot thank YAMAHA enough for their ongoing work as we continue to improve the instrument for the benefit of myriad players around the world who find that it is their “voice,” too.

At the same time, I’m aware that what we musicians do on a daily basis is not a natural act. Watch any musician play his or her instrument and it doesn’t take long to see that despite a player’s best efforts to sit or stand comfortably, or the ergonomic developments that a maker brings to instruments, playing any musical instrument puts us in a difficult place. Hold a violin between your chin and left shoulder. Splay your hands and hold a bassoon. Support the weight of a tuba on your lap. Stand behind a double bass. Lift up and crash together a pair of cymbals. Hold up a trombone.

In all of these instances – and many more – I do not know a single professional musician who does not suffer from some kind of physical consequence of playing his/her instrument. As I often say, musicians bear the stigmata of performing. Most of my colleagues in the Boston Symphony were under the regular care of some kind of medical provider. A physical therapist, massage therapist, chiropractor, physician, surgeon. Tendinitis, tendinosis, torn rotator cuff, hearing loss, neck problems, hand problems, knee problems, back problems. Therapy, medication, surgery. It’s part of the life of a musician. The literature on this is extensive, including a journal devoted to the subject, Medical Problems of Performing Artists.

I’ve had my share of physical issues over the years due to a lifetime of lifting and holding up six pounds of bass trombone for hours a day. I’ve had a torn tendon repaired in both elbows, and seven fingers have had surgery for the condition commonly known as “trigger finger,” a condition where, because of gripping, a finger will lock down when one makes a fist and will only come back up with an uncomfortable “snap.” I’m looking at an eighth finger surgery in the coming months. As a result of these procedures, I no longer have the same strength in my hands that I once had.

Several years ago I began using a left hand brace on my trombone made by Neotech. This has been a great help to me since it transfers the weight of the instrument to the back of my left hand and I no longer have to grip the trombone in order to keep it from falling out of my hand. On the photo of my trombones in the header of this article, you can see a small black appliance attached to the outer hand slide’s lower ferrule to which the Neotech brace conveniently attaches. But the weight of my bass trombone – six pounds – remains considerable. I am grateful for the gifted physicians, surgeons, and physical therapists who have helped me get through these rough patches so I can continue to play the trombone. But I’m not getting any younger, and I would love to play the trombone for many more years. I have long wondered if, someday, I could have a bass trombone that weighed less and therefore put less stress on my body to hold it up. But it would not be enough that it was light. It would also have to sound great. 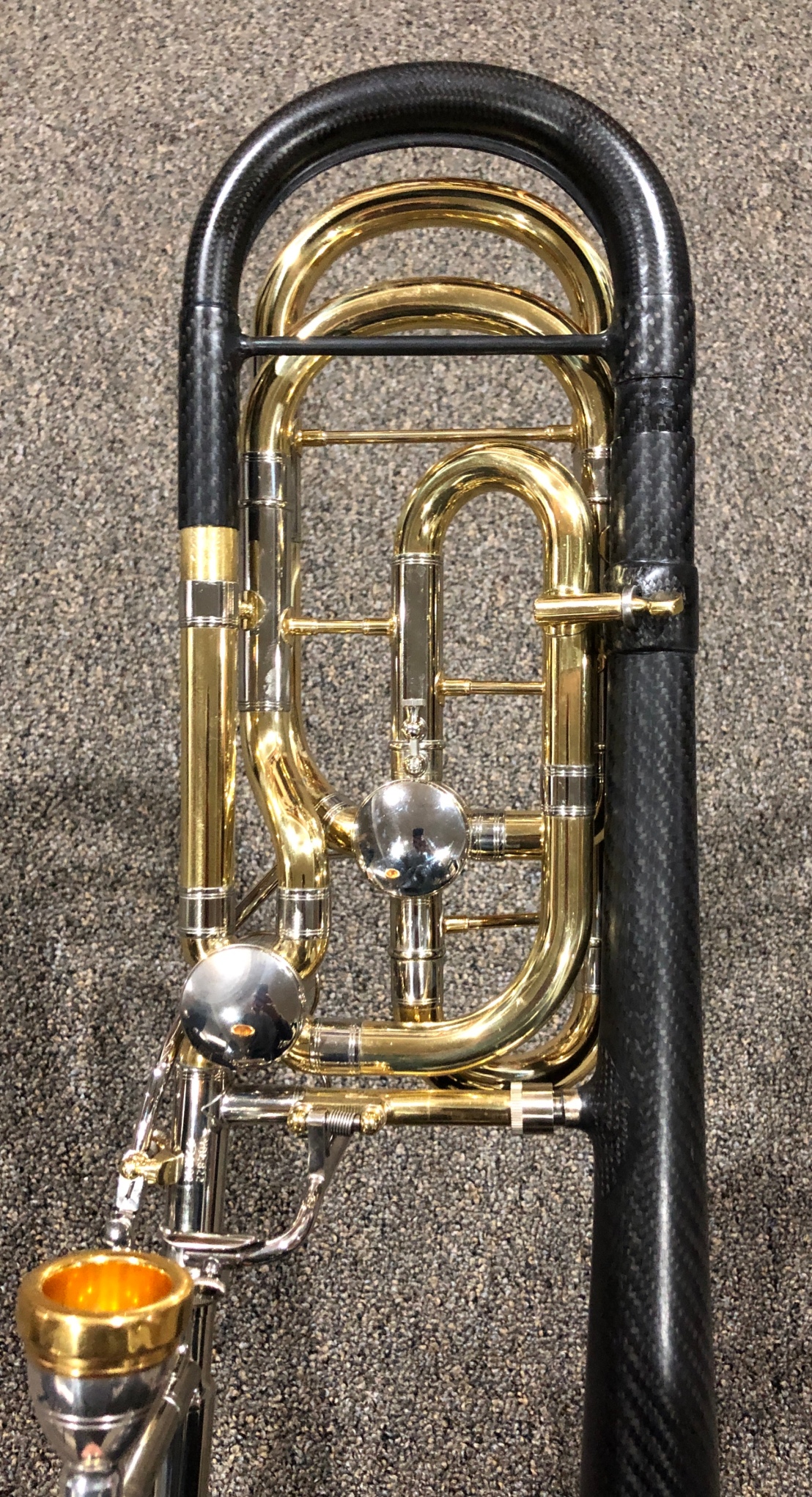 At the International Trombone Festival in 2017, I came across the booth of Butler Trombones. They had a display of small bore jazz trombones made out of carbon fiber. Always interested in new things, I pulled a small shank mouthpiece out of my bag and gave it a try. I was stunned. It sounded like a trombone. I fully expected it to sound like a glorified pBone, a high tech plastic trombone. I thought to myself, “This is not a toy.” What shocked me was that it sounded like – well – a trombone. And then this: the weight of the instrument was miniscule. I realized right away that the hand slide weighed virtually nothing and that the inertia caused by moving my normal brass slide was nearly eliminated. This was not a usual “lightweight slide” of nickel that often sounds cheap and thin. This trombone sounded great, holding it was virtually effortless, and moving the slide was something completely new. Completely new. My mind was reeling. And then my thoughts began to race and wonder, “If this small bore trombone sounds so great, could a bass trombone be made that sounds great, too?”

I spoke with Dave Butler about this. No, he had not yet made a bass trombone and one was probably some time away in research and development. But my enthusiasm caught his attention and with the blessing of YAMAHA, Dave has been working to retrofit one of my YBL-822G bass trombones with a carbon fiber bell, main tuning slide, and outer hand slide.

Now, I would not have started going down this road if I was not persuaded that the instrument that would eventually fit in my hand would be of the highest quality. I wanted to sound like me, and like most people, I was initially a little suspicious that a carbon fiber trombone could sound anything like a standard brass and nickel trombone. Intuitively it just seemed that brass would sound better. But after working with Dave Butler, I realized that I initially approached the idea of a carbon fiber trombone with a predetermined prejudice: I was hearing with my eyes. The carbon fiber parts are black. They look different than brass. Dave Butler’s website prominently features a quotation by John Maynard Keynes:

The difficulty lies not so much in developing new ideas as in escaping from old ones.

I needed to give this an honest chance. 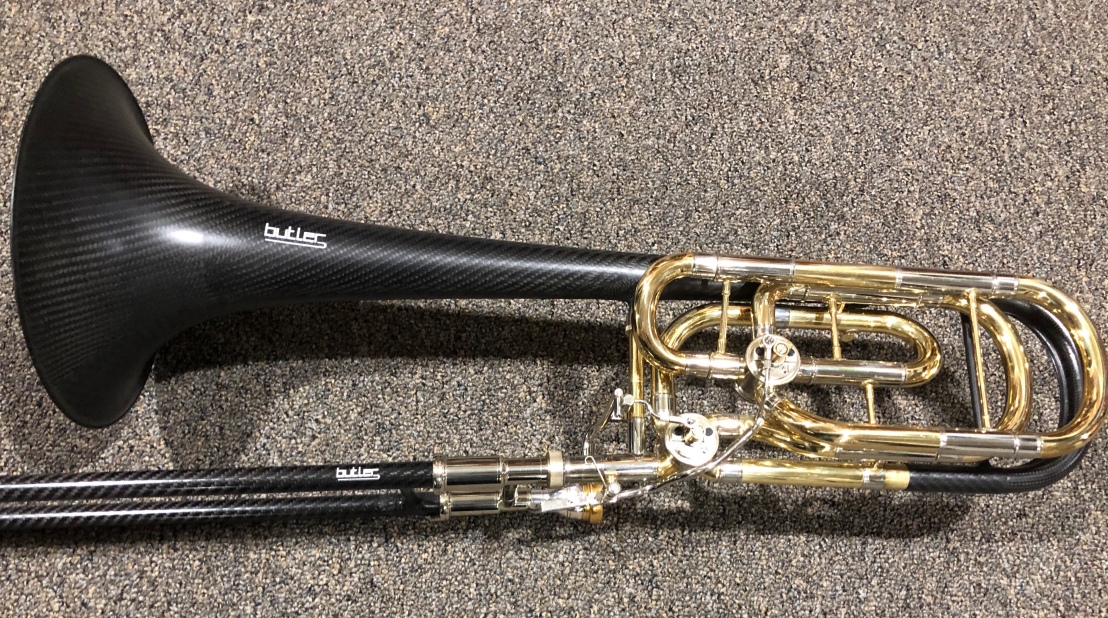 So I asked Dave Butler to make these carbon fiber parts for me. I took delivery of the outer hand slide last April when I was performing at the Texas Christian University (TCU) Trombone Summit. When Dave handed it to me, I immediately put it on my bass trombone and walked out on stage to perform with it. I figured that would be a good test. It passed with flying colors. I was just knocked out with how great it sounded. And felt.

Yesterday, my new carbon fiber bell and main tuning slide arrived. Think about this: the weight of my double-valve bass trombone has been reduced from six pounds to four. A one-third reduction in weight. The instrument is so light that I no longer need to use my Neotech brace to support the weight of the trombone in my left hand. That’s because there’s so much less weight to support. And the sound? It sounds like me. It sounds great. This is not a toy.

Recently, I’ve learned WHY a carbon fiber trombone sounds so good. That’s because acoustically, a carbon fiber bell has very similar qualities to a brass bell. This has been scientifically determined. I commend two recent resources to those interested in more about the scientific basis for understanding the similarity between carbon fiber and brass. The first is an article by Hannes Vereecke and Wilfried Kausel, “Carbon Reinforced Polymer: An Alternative to Brass?” International Trumpet Guild Journal, Vol. 37, No. 1 (October 2012), 41-43. This is an excellent description of the acoustical properties of brass and carbon fiber as applied to brass instrument bells. The second may sound a bit surprising: Hannes Vereecke, The Sixteenth-Century Trombone: Dimensions, Materials and Techniques (Turnhout, Belgium: Brepols, 2016), 41-44. Vereecke is an acoustician who has studied musical instruments, particularly trumpets and trombones. His book on the sixteenth-century trombone is, to my mind, the best single volume devoted to construction and the playing properties of the Renaissance trombone, the instrument we popularly call the sackbut. In his discussion about the acoustics of brasswind instruments, he devotes several pages to a comparison of brass and carbon fiber. He concludes that:

“Playing tests revealed that the listeners were not able to distinguish between the sounds of the two instruments [brass and carbon fiber]. Therefore, it can be concluded that while the bell material affects primarily the playability of the instrument, in this case the difference in sound may be beneath the threshold of detection. CFRP [carbon fiber reinforced composite] has found a place in contemporary trombone design, and the same improvement in responsiveness is also confirmed there.”

To say that I am enthusiastic about what Dave Butler has done would be a profound understatement. My new carbon fiber parts as installed on my YAMAHA YBL-822G bass trombone have given me an instrument that is highly responsive and lightweight but has a sound I would expect to be produced by my fully brass and nickel bass trombone. Dave Butler’s work with carbon fiber will allow me to continue playing the trombone for many more years as a result of the instrument’s reduced weight and great responsiveness. And I am just at the beginning of this process; I expect I will learn even more about how this instrument as I continue practicing in the days and weeks ahead. Dave has also told me that he has plans to make an entire bass trombone out of carbon fiber, and that someday it might even have titanium valve rotors. A two pound bass trombone that sounds great? It is not outside the realm of possibility. For all of this I am very grateful, and I urge any reader who finds this to be intriguing to reach out to Butler Trombones (www.butlertrombones.com) and find out for yourself. This is not a toy. We are witnessing one of the most significant developments in trombone design and manufacturing since the invention of the F-attachment in 1839. This is not an exaggeration; of this I am quite serious. The future is now.