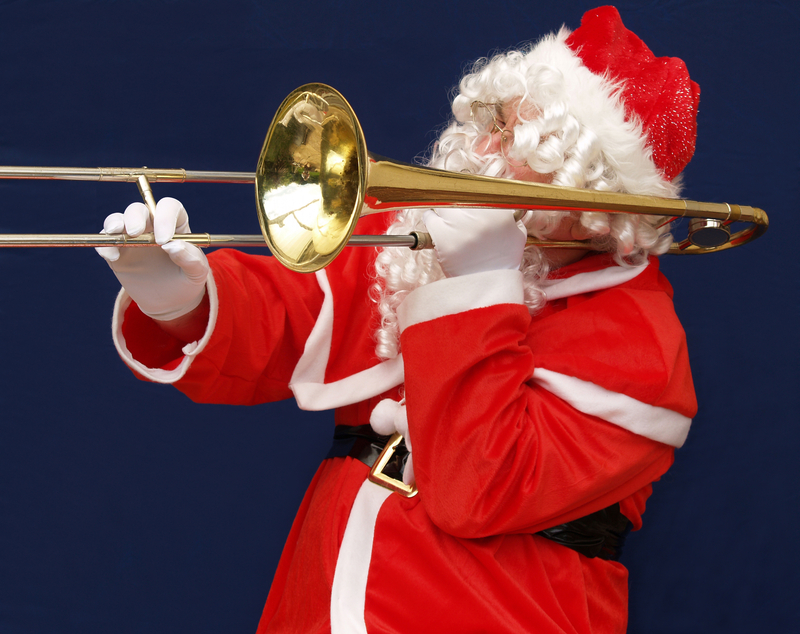 As a reader of The Last Trombone, you know that I enjoy seeing how the trombone intersects with popular culture. At this time of year, it’s time to bring out some of my favorite images and a great recording about that famous man in red and white, Santa Claus. Who, as we all know, plays the trombone. Right?

I’m writing a book about the trombone right now and have just finished the chapter on the history and evolution of the instrument. One thing that we always have to keep in mind when looking at images of the trombone throughout history is that iconography is not always a reliable indicator of how an instrument actually looked. Santa is no exception. Sometimes we see him holding the trombone just right, like the image at the top of this article, and this one (Santa not only plays the trombone, but he think’s he’s really cool, too): 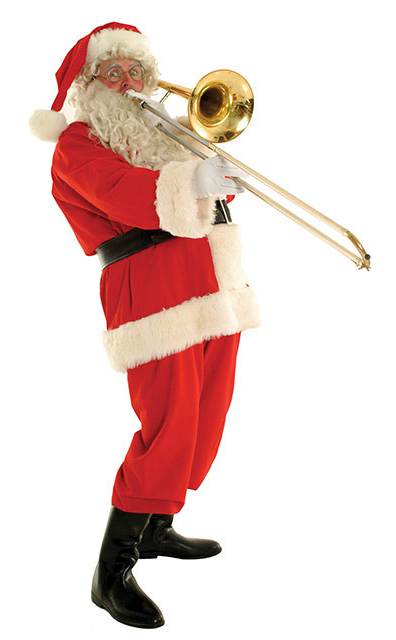 It’s hard to see his embouchure but apart from a posture that’s going to give him trouble when he’s 3000 yeas old, he seems to have the trombone under control.

Then again, sometimes Santa puts the trombone together backwards. But he still thinks he’s cool. Time to get your glasses checked, Santa. Here we go again: iconography as a poor indicator of what and instrument looks like or how it works: 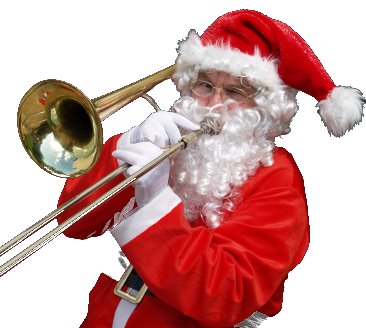 Then there is Santa with the music to “Jingle Bells” on his lyre (seriously, Santa, do you really need to use the music after all these years?).  And the trombone put together backwards? Again?

Well, when he puts his glasses back on, evidently Santa can remember how to put the trombone together correctly, but from the look of things, he isn’t exactly making beautiful music – what note IS that? 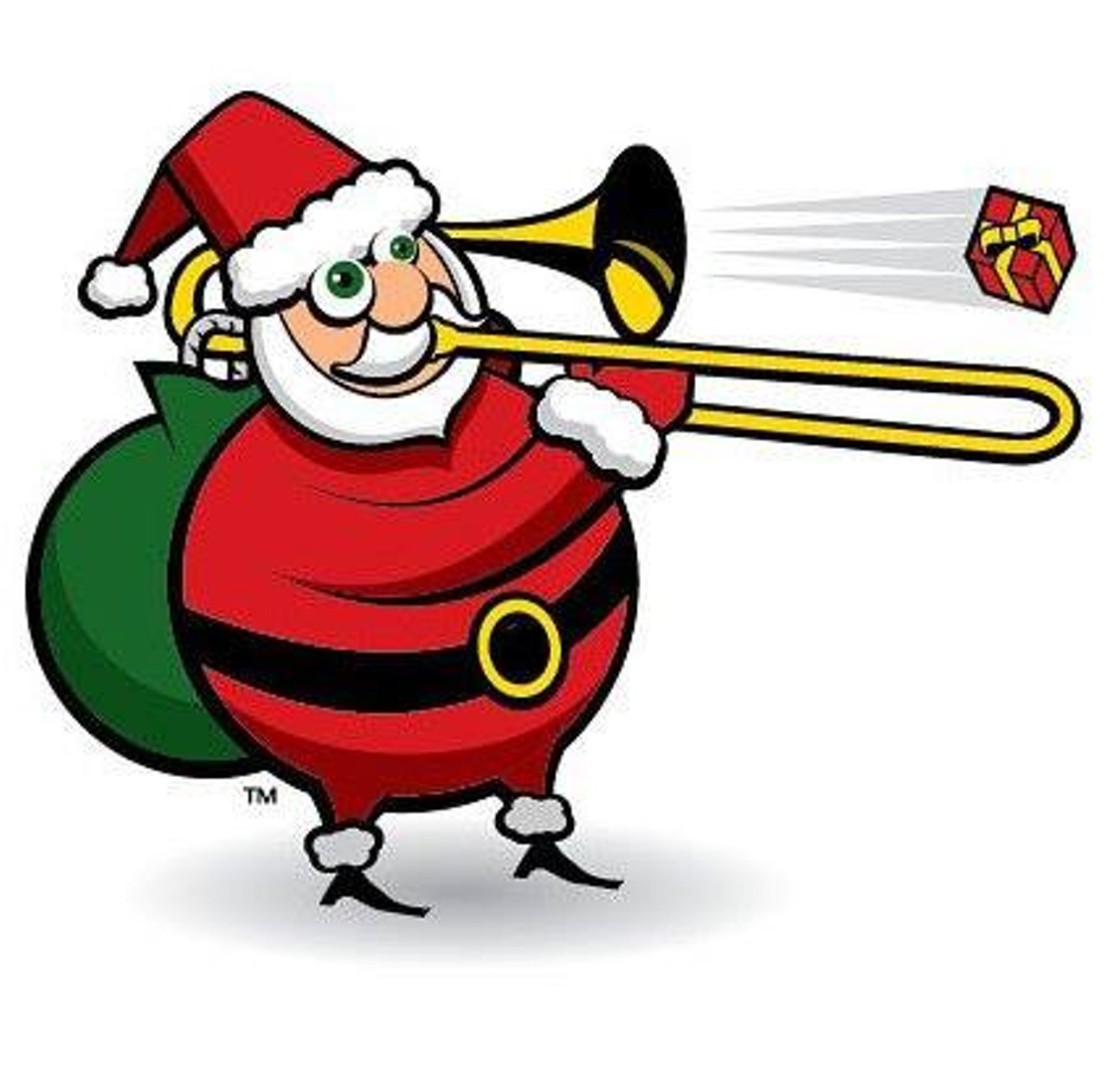 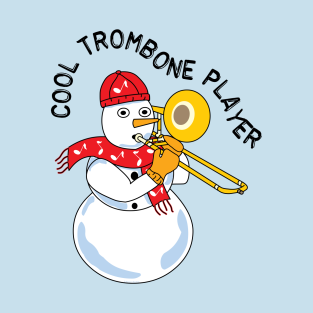 If you want to HEAR Santa play the trombone, then here you go. Poppa John Gordy and his Dixielanders recorded Santa’s favorite song, “Santa Plays the Trombone (In the North Pole Band),” with Clint Garvin, vocalist. The trombone player isn’t identified on the record label so, of course, is HAS to be Santa himself. Right? Have a listen by clicking the video below, or view/listen to it on YouTube by clicking here.

If this doesn’t jump to the top of your Christmas music play list, then you’ll probably get coal in your stocking.

I’ll close this little popular culture tour of Santa and the trombone with a poem I wrote  that’s made the rounds over the years. It first appeared in December 2012 when I was in my first year as Professor of Trombone at Arizona State University. Santa plays the trombone. He really does.

A Visit From Santa Claus To A College Trombone Player

T’was the night before Christmas and all through my home,
All the horns were in cases, including trombones.
For after the finals and juries and tests,
It was time for some shut-eye; I needed some rest.

I was dreaming of straight mutes and pBones and more,
When I woke to a sound that I’d not heard before.
And what should I see on my roof up on high?
A Moravian choir, with trombones playing fine.

Alessi and Lindberg, Kleinhammer and Yeo,
Were all playing their horns, their heads covered with snow.
And who should be leading this heavenly band?
But old Santa himself, a trombone in his hand!

“On JJ! On Jörgen! On Tommy and George!”
This band was so sweet, I sure did thank the Lord!
“On Norman and Pryor, Ron, Urbie and Frank!”
Some others played, too, but my mind drew a blank.

I grabbed my trombone and I lubed up the slide,
With no time for a warm-up, I hurried outside.
The gang was all playing some mighty nice tunes,
And we jammed some cool charts by light of the moon.

I invited them in just to warm up their chops,
But they just kept on playing, man, this sure was tops!
Saint Nick put his horn down to fill up my stocking,
With valve oil, and slide cream, CDs – so inspiring!

In time, things wound down and they packed up their horns,
And the sleigh got revved up and was heavenly borne.
But Santa looked back, and he said with a smile,

“Merry Christmas to all, and don’t forget to keep practicing even though you’re on vacation!” 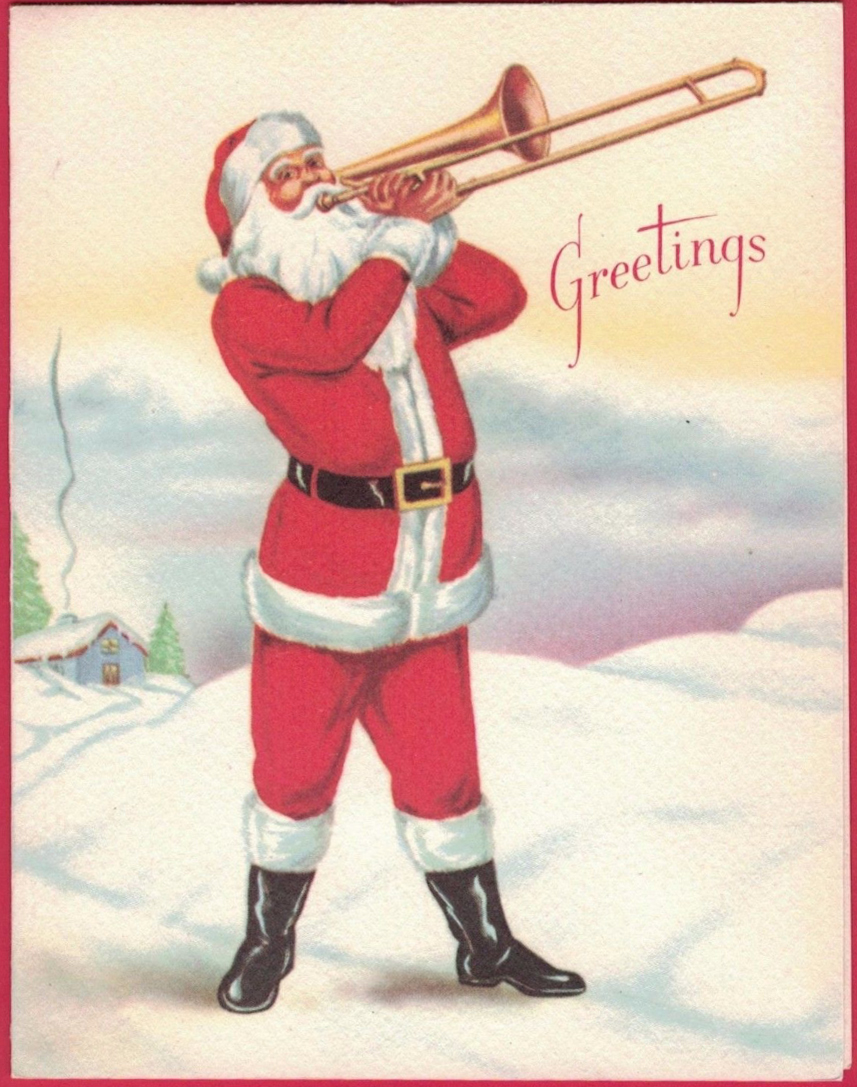