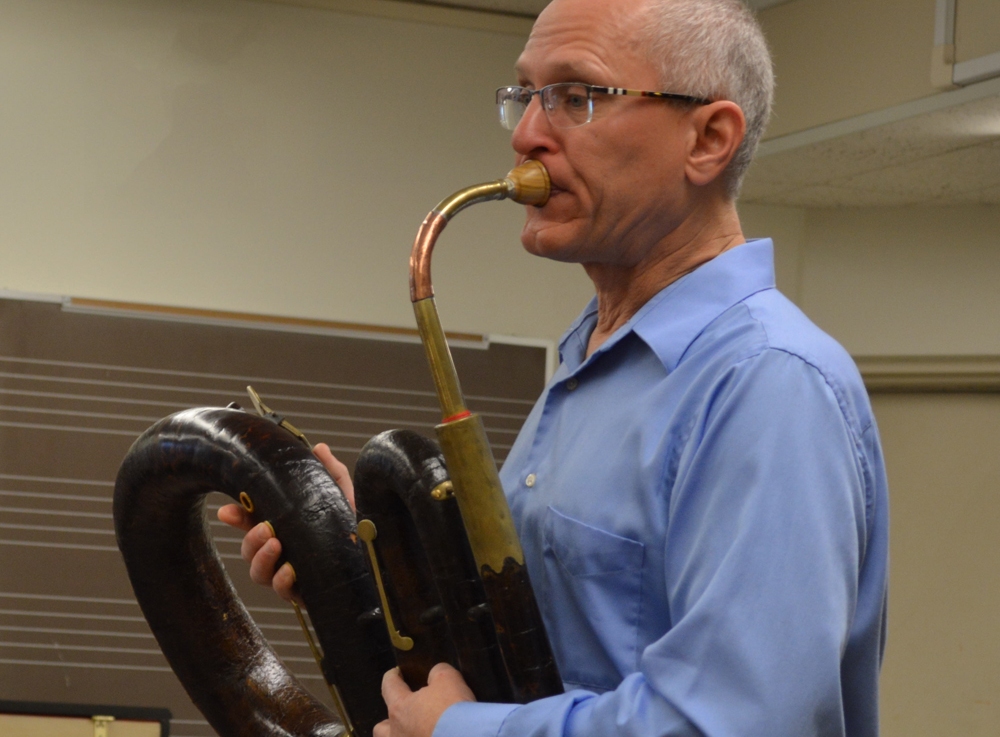 I have just returned from a residency at Bowling Green State University (BGSU), College of Music Arts, in Bowling Green, Ohio.

Plans for this residency were first laid in July 2014 when I received an unusual request. BGSU had recently received a gift of a 19th century English military serpent and they wanted to know if I would be willing to come to the University to introduce the instrument to the community. And thus began a very interesting journey. 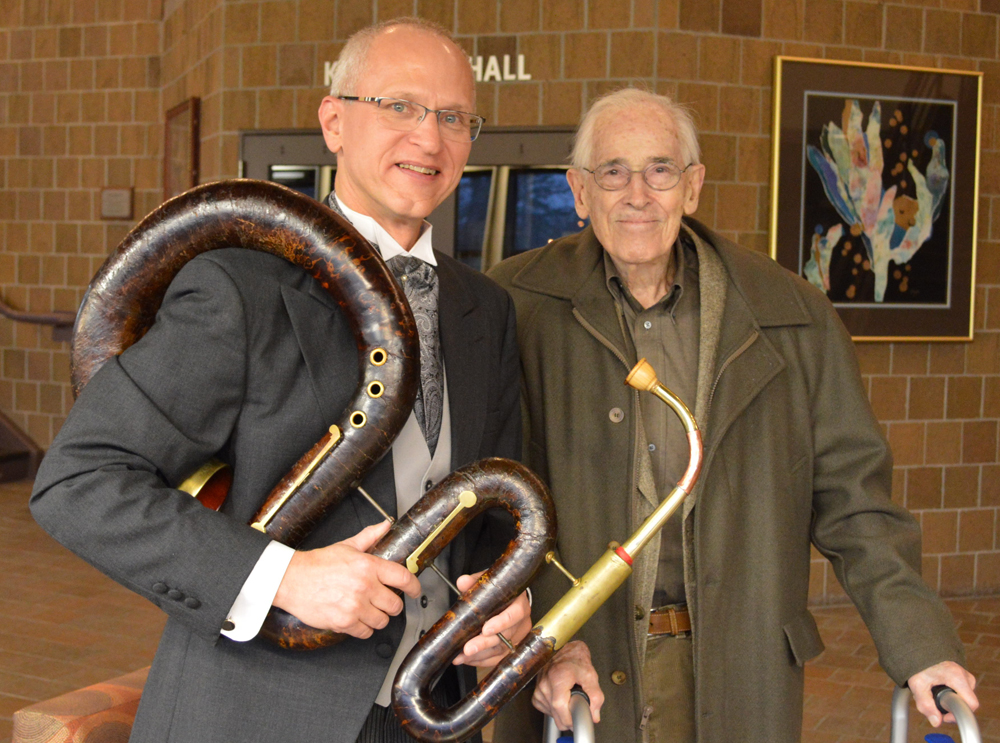 It seems that Dr. Glenn Varney, BGSU Professor of Management (Emeritus), shown with me in the photo above, had gifted a 19th century serpent to the BGSU College of Musical Arts. This instrument, an English military serpent with four keys that was probably made around 1830, had been in the family of his late wife, Ruth P. Varney for many years, having been purchased from a dealer in London who said the serpent was last used by a musician in a regimental band during the Boer War (1899-1902). Over the years, the serpent had suffered some accidents  – then again, wouldn’t YOU be in rough shape if you were nearly 200 years old? – and some needed restoration was done by J.c. Sherman of Cleveland. The University contacted me to ask if I could give some kind of a program at BGSU that would feature the serpent.

Now, those who know me know that I have played the serpent since 1994.  I’ve played many historical instruments in museums around the world, but before I could commit to playing a concert on an instrument I had never seen – let alone played – I needed to hold it in my hands and spend time with it. So last year, BGSU shipped the Ruth P. Varney Memorial Serpent to me so I could get to know this instrument.

No two serpents are alike and it took me several months to understand the unique qualities of the Varney serpent. My friend, Phil Humphries, a serpent player in England who plays in the London Serpent Trio and the Mellstock Band, likes to say that every day before he picks up his serpent, he looks at it and says, “Well, what kind of mood are you in today?” In time, I managed to come to grips with the playing characteristics of this particular serpent to the point where I could commit to use it in performance. I organized a program of chamber music that had been written to include the serpent, a program I had given in 2011 in Rouen and Paris, France: marches by Christopher Eley, Samuel Wesley and Josef Haydn, and a Divertimento attributed to Haydn that included the famous “St. Antoni Chorale” that Johannes Brahms famously used as the basis for his “Variations on a Theme By Haydn.” The concert that we presented – the group was superb, featuring a mix of BGSU faculty, students and other local players – was enthusiastically received by the audience. The group included Nermis Mieses and Jana Zilova, oboe; Derek Emch and Erin Cameron, clarinet; Andrew Pelletier and Kristen Running, horn; Greg Quick, Alex Meaux and Jack Smolenski, bassoon; and Charles Saenz, trumpet. 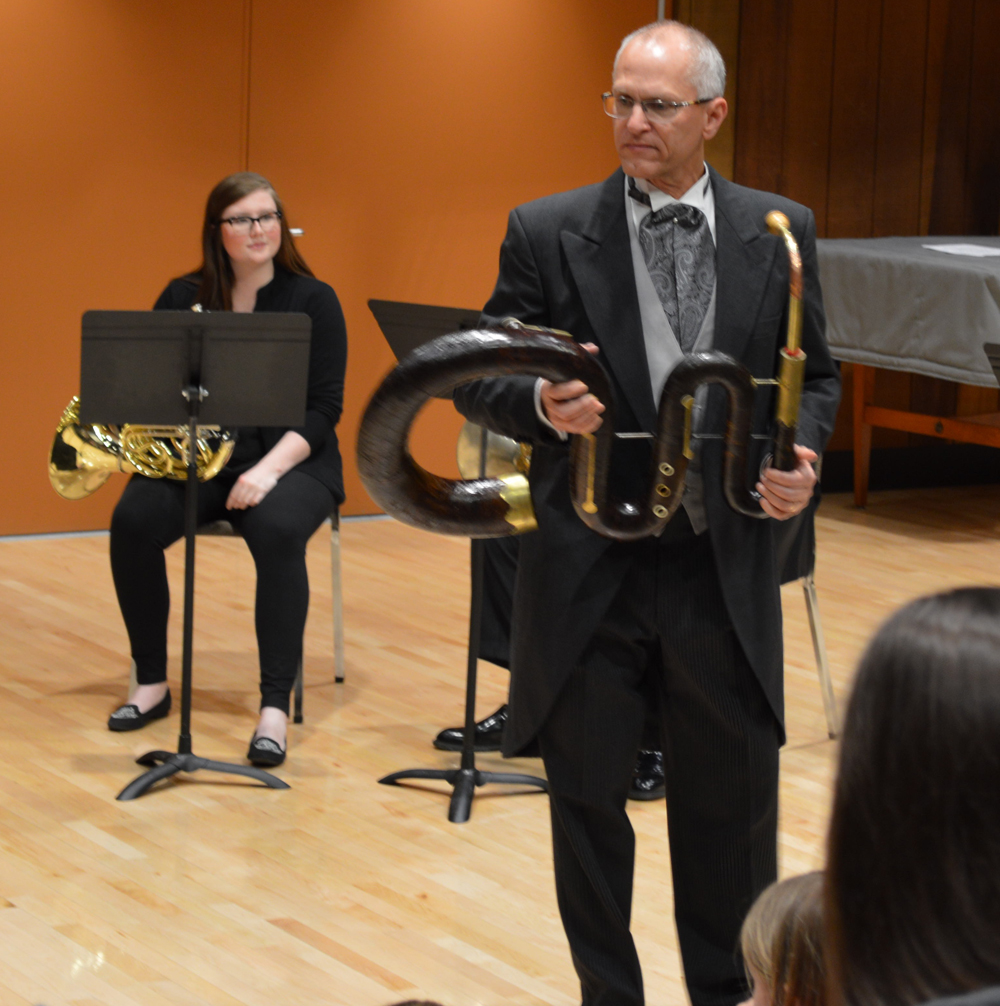 I titled the concert, “The Ruth P. Varney Memorial Serpent: A Conversation and Concert Led  By Douglas Yeo.” In this, I was able to engage the audience with information about the serpent, its role in music – from its important work accompanying chant in the church in France from the 16th century through its introduction into military bands, chamber music and the symphony orchestra – and the generosity of Glenn Varney in donating this extraordinary instrument to BGSU in memory of his late wife. 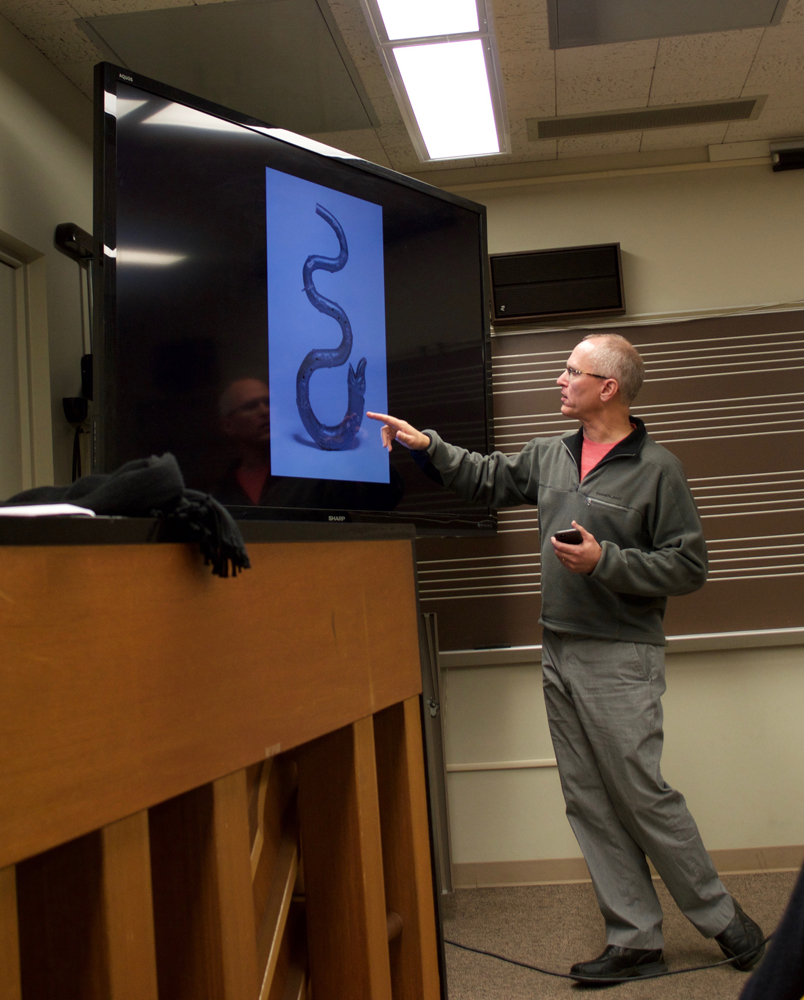 While at Bowling Green, I also had the opportunity to lead a music history seminar that discussed the serpent. The class, taught by Dr. Arne Spohr, provided an opportunity to discuss how the serpent was part of musical culture in France, Germany and England, and its particular role and sound in large and small performance spaces. This was a very stimulating class with great discussion and questions from the students. 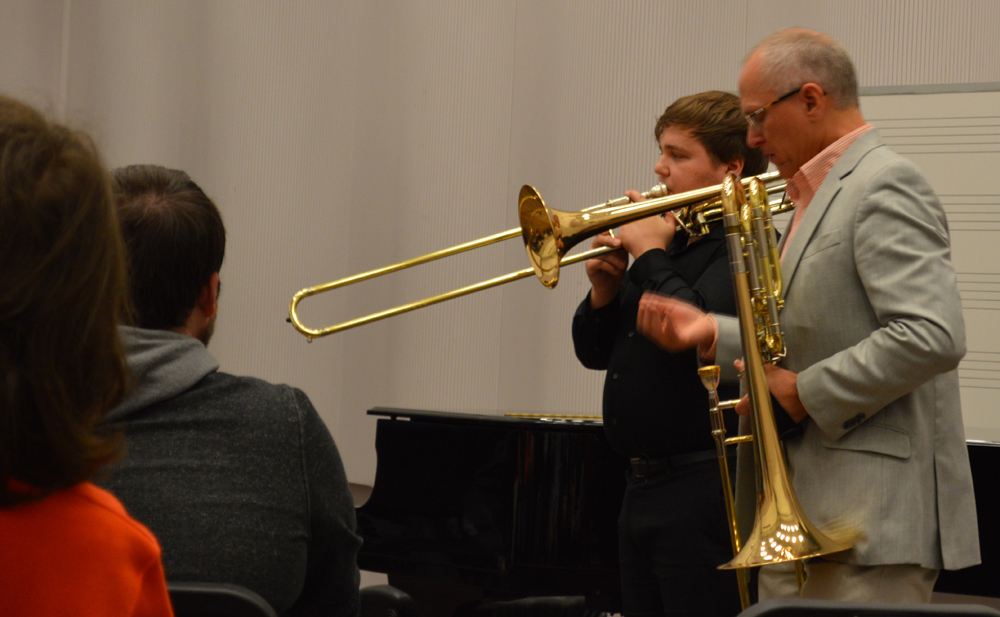 In addition to a masterclass for the BGSU tuba/euphonium studio – the photo at the top of this post was taken in that class as I was demonstrating the serpent (if you receive posts from The Last Trombone by email and can’t see that photo, click on the title of this post to open it in your web browser where you can see the photo) – I also gave a trombone masterclass where I worked with several students on solos, heard a low brass section play excerpts from Brahms’ Symphony No. 2, and also a trombone quartet. These were talented students and working with them was a great pleasure. 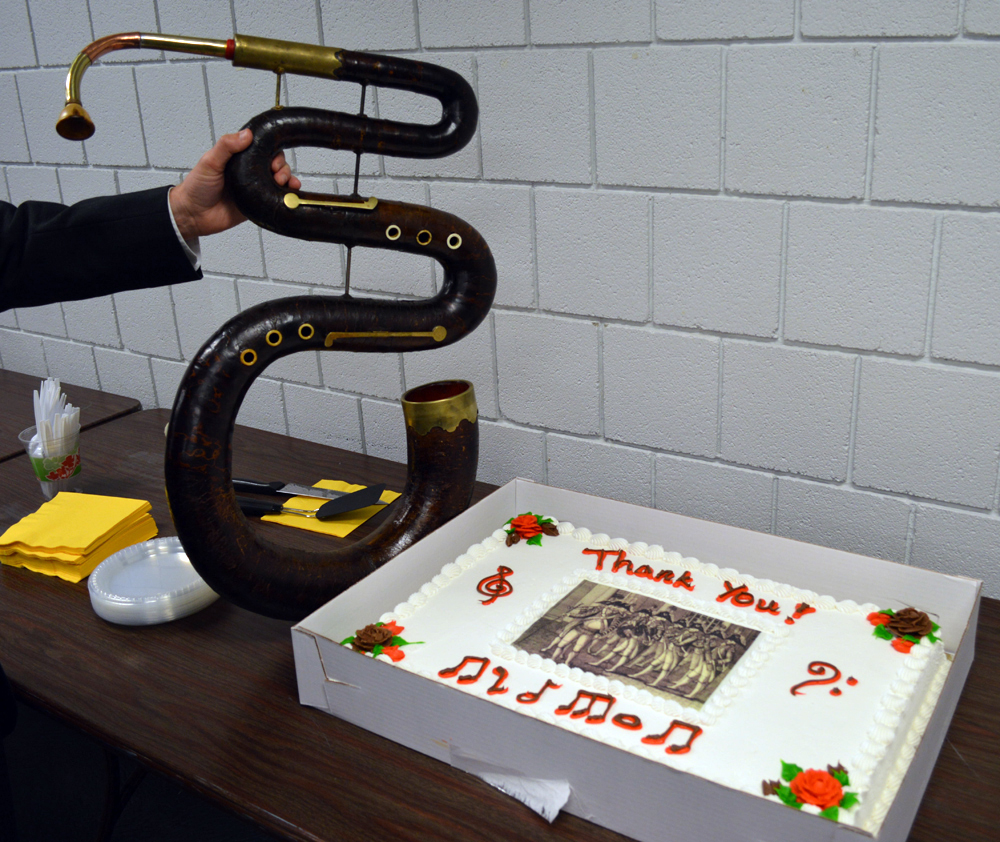 And, hey, it’s not every day you get to see a face cake with a serpent on it. Following the concert, the College of Musical Arts hosted a reception in honor of Glenn Varney and his gift of the serpent in memory of his wife, Ruth. On the cake was a famous image from the British Museum of the Duke of York’s Band, c1790, with serpent front and center. Seriously! 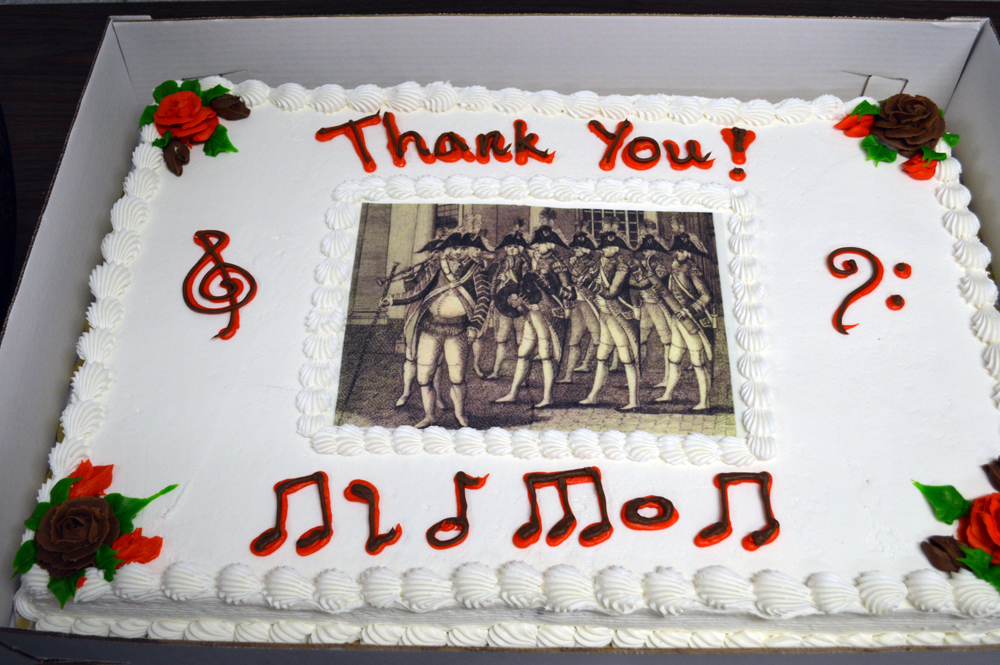 My time at BGSU generated some nice articles in the local press that you can read here:

Musical serpent to be celebrated at BGSU (BG Independent News)

Over the years, I have conducted many residencies at colleges and universities around the world. This residency at Bowling Green State University was one of the most diverse I’ve ever conducted and it was exceptionally well organized and very satisfying in every way. I owe a big “thank you” to BGSU Dean of the college of musical arts, Dr. William Mathis, tuba instructor David Saltzman, adjunct associate professor of trombone Garth Simmons, associate professor of horn Andrew Pelletier, and associate professor of musicology Arne Spohr for all they did to organize my various activities during my visit. And I must also thank Lindsay Gross, manager of Public-Community Relations for the BGSU College of Musical Arts who was of tremendous help in making everything during my visit work so smoothly.

Most of all, I left Bowling Green with gratitude to Glenn Varney, whose gift of his wife’s family’s serpent was the driving force behind my visit. Thank you, Glenn, for providing me with this rich opportunity to engage with students, faculty and the BGSU community and to bring the serpent to the fore in a very unique and special way.

[NOTE: All photos in this post were taken by Lindsay Gross.]