The brainchild of the late Harvey Phillips – Professor of Tuba at Indiana University for many years – TubaChristmas has been going for 43 consecutive years. What started at Rockefeller Center in New York City on January 1, 1974 as a tribute to Phillips’ teacher, tuba great William “Bill” Bell (who played tuba with the Sousa Band and the New York Philharmonic Orchestra for many years among many outstanding contributions to the music world) blossomed into a world-wide event. This year, my wife, Pat, and I took part in our first TubaChristmas.

The Phoenix TubaChristmas was led by my ASU Tuba Professor colleague, Dr. Deanna Swoboda . Deanna is a tremendous teacher, player and person, one of my best friends, and she brought her musical expertise and great, fun personality to lead a group of 122 players – a record number for the Phoenix TubaChristmas event – of every type, size and shape of tuba related instrument. Contrabass tubas, bass tubas, Sousaphones, euphoniums, baritones. And a contrabass serpent. The photo above shows me with my “anaconda” serpent, “George,” along with Deanna and Pat (with her British style baritone horn – she played baritone horn in the New England Brass band from 1998-2008 when I was the Band’s music director) at Tempe Marketplace near Phoenix, Arizona.

OK, a word about “George.” Made in 1990 by the late Christopher Monk, “George” was the second contrabass serpent ever made, the first being constructed in the 19th century in Huddersfield, England. “George” was commissioned by the late Philip Palmer and after Phil’s death, I purchased this extraordinary instrument from his widow, Connie Palmer. 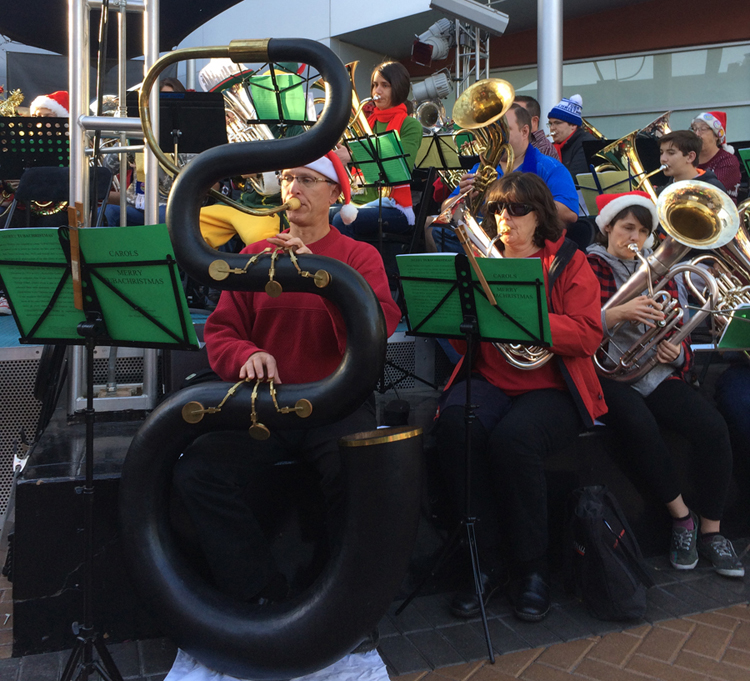 “George” got its name because it was on April 23 – St. George’s Day – in 1990 that this instrument first received breath from Christopher Monk. 16 feet long, it is in CC; it is made of choice sycamore covered with leather. It was built to be a double size French church serpent with brass keys since the holes are too large to be covered by one’s fingers. The boxwood mouthpiece was made for me by the late Keith Rogers who succeeded Christopher Monk as serpent and cornet maker of Christopher Monk Instruments in England. The serpent is considered the ancestor of the tuba family, a bass wind instrument with a cup shaped mouthpiece that had its origins in – well, it all depends on where you come down on serpent scholarship. Certainly it was being used in France by 1590 but it very likely had origins in Italy somewhat before that time. You can get a lot more information about the serpent by visiting The Serpent Website where you can also download past issues of The Serpent Newsletter. Seriously! 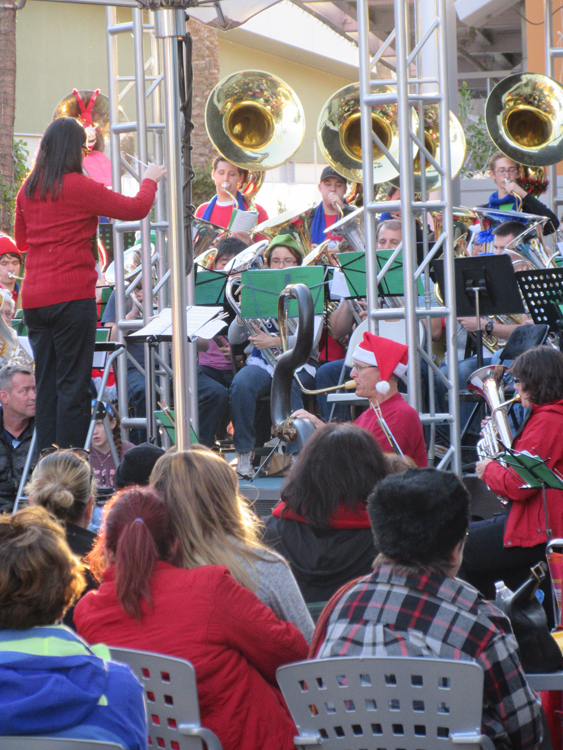 Bringing “George” along to TubaChristmas – and I should say that this is a real, serious instrument, capable of playing with a beautiful sound; I used this instrument on my CD of music for serpent, Le Monde du Serpent – was great fun. Deanna asked me to say a few words about the serpent both at the rehearsal and the performance, and I played a verse of “Good King Wenceslas” to demonstrate its capabilities. I posed for a photo with many audience members who wanted to be seen with “George,” and I enjoyed many conversations with people who wanted to know more about the serpent.

Our playlist featured 18 well-known Christmas tunes, both popular songs and traditional carols. The audience was enthusiastic and appreciative. Well, you don’t exactly see 122 tuba-type instruments gathered in one place, with players from age 13 to in their 70s, celebrating “the most wonderful time of the year” in a festive way. Part of the fun was knowing that this same kind of event was going on all around the world. Not every place could have their TubaChristmas outside like we did here in Phoenix; Chicago, for instance, had their TubaChristmas in a ballroom at the Palmer House Hotel. But no matter whether it was inside our out, with few or many players, TubaChristmas has developed into a very special event that bring people together with music. A big thank you to Deanna Swoboda for her great leadership, and to all participants and audience members. Merry TubaChristmas!