I am confident that most people who were alive on September 11, 2001 and who were old enough at the time that they have memories of that date, remember where they were when they heard the news that the World Trade Towers in New York City had been attacked by Islamist terrorists. I remember that day like it was yesterday. I was in the post office in my home town, Lexington, Massachusetts, when the counter clerk told me the news. Stunned, I got in my car and continued driving to Symphony Hall, Boston, where I was planning to pick up my trombone – the Boston Symphony had just returned from a European tour a few days earlier – and teach my students at New England Conservatory of Music. When I arrived at Symphony Hall, I gathered my trombone and other belongings from my tour trunk just as the Hall was being closed for security reasons. Classes at NEC were cancelled and I stood in front of a hardware store on Massachusetts Avenue and watched a display of televisions reveal the horror of horrors – the collapse of the Twin Towers that resulted in the death of 2,996 and the injury of over 6,000 innocent people. Confusion, disbelief, anger, despair, resolve.

I still feel a wave of emotion when I remember this. I knew the World Trade Center well, having been up to its observation deck many times. The Towers were opened in 1973, and in January 1976, my wife and I went into New York City with her parents to enjoy a day out. Our first stop was the World Trade Center where I took my first photo with our new 35 mm camera, a Christmas gift from my in-laws. That photo is above. When we got to the observation deck, we enjoyed a view we were to enjoy many more times, below.

I also recall the first Boston Symphony tour to New York City after 9.11. The BSO went to play concerts in Carnegie Hall three times a year at that time and we had a concert scheduled on October 16, 2001. The players asked the orchestra management if, instead of flying to New York, we could take the train; our management agreed. Music Director Seiji Ozawa had changed the program, originally scheduled to be Robert Schumann’s Scenes from Goethe’s Faust, to Hector Berlioz’s Requiem.

As our Amtrak train came out from under Long Island Sound and we traveled through Queens, Manhattan came into view. It was at that moment, when the familiar skyline with the World Trade Towers simply no longer existed, that the enormity of 9.11 sank in. The only sound in the train was the turning of its wheels and the weeping of the Orchestra’s men and women.

So, it is to music we often turn to help us deal with loss, to remember, to push forward. The Boston Symphony offered Berlioz’s Requiem at Carnegie Hall. Another piece is Samuel Barber’s Adagio for Strings, so memorable for its touching accompaniment to dramatic scenes in movies like The Elephant Man and Platoon. A piece I’ve often turned to is Arvo Pärt’s Fratres, a work I arranged  for trombone choir in 1991 with the composer’s permission (see below) for a performance at New England Conservatory. (Some may ask if  the arrangement is available; it is not. I received a license that only allowed me to arrange the piece for a single performance.) Pärt’s music speaks to me deeply and I often listen to it during periods of intense reflection. A new recording of some of his best choral music, Tintinabuli, by the Tallis Scholars, is part of my playlist today.

As we reflect on the events of 9.11.2001, here on the 15th anniversary of the attacks, may we find renewed compassion and strength for the challenging days ahead. 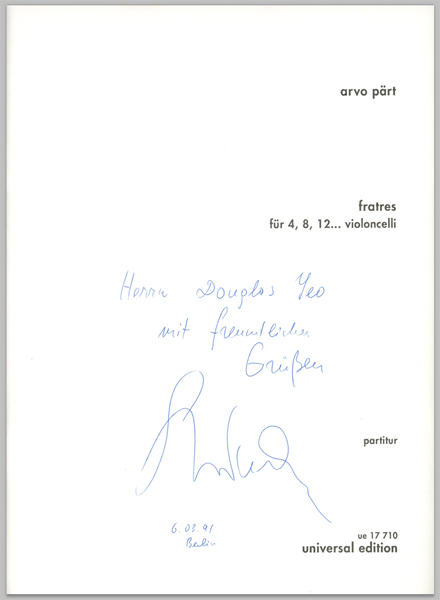